It was introduced as the Killer of CHAPTER XIII: Stranger Things, a Chapter DLC released on 17 September 2019.

It originates from the 2016 Sci-Fi-Horror Web Television series Stranger Things.

The Demogorgon is an unidentified Killer, able to open multiple Portals and traverse between them to cover large distances. Using its Power, Of the Abyss, it can detect any Survivors within a close proximity to the Portals then unleash a leaping attack to inflict damage from a distance. Its personal Perks, Surge 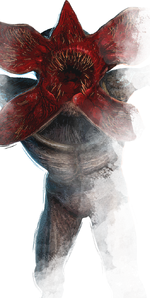 A blooming mouth full of needle-like teeth for a face, large, curved, razor-sharp claws, and powerful legs to pounce on victims, make The Demogorgon a frightening monster to face in any dimension. It is a nightmare of unrestrained, feral rage as it hunts down its prey and rips it to pieces, devouring every last morsel of flesh and gore, leaving nothing for scavengers. The creature is untouched by any sense of compassion or restraint. Looming over its victim, it shows no doubt or mercy, just the pure instinct of its insatiable blood lust as it delivers the deathblow. A perfect hunter, The Demogorgon is a macabre testament to the horrors lurking in the Upside Down and why it was choice pickings for The Entity.

Once obtained, other Killers will be able to find The Demogorgon's Perks in their respective Bloodwebs from that point onwards.

A gargantuan hand of immense strength. Its long fingers can brutalise prey.

Template:Add-ons: Of the Abyss (Demogorgon)

There are currently 2 Achievements related to The Demogorgon. Template:AchKiller

Players may customise their Character by choosing one outfit style from each category. Blood-stained attire is obtained after The Demogorgon reaches Level 50 and prestiges.

The Demogorgon is currently part of 1 DLC package: