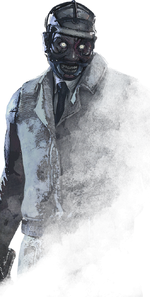 Additional Lore can be found in Tome II - Reckoning: Ascendance.

From an early age, Herman Carter understood the human psyche. To analyse and de-construct something as powerful as the brain intrigued him. He was an apt pupil and gained the attention of his teachers. He excelled in high-school and was published in "Partisan" - a psychology gazette. Within a year, Carter was fast-tracked into Yale's advanced neuroscience programme, really a front for the CIA. Brainpower is a must if you're about to conquer the world and demolish foes across the pond. The CIA understood this, so interrogation and intelligence became their number one priority. All they needed were brilliant people - like Carter.

Carter and other top-tier recruits were transferred off-campus and into a secret black site facility in Illinois known as the Léry's Memorial Institute. A protégé craves a mentor, and that's where Mr Stamper stepped in, who taught Carter that information is everything and knowledge is power. He was given all instruments needed, a guiding hand, and more or less everything he asked for. He never realised that sunlight had started to become so scarce, that he too was kept in the dark. Because knowledge doesn't only give you power, it also transforms you into a threat.

To extract information was his mission. Mr Stamper encouraged Carter to go further and not to consider this a normal medical facility - no eyes were watching them, there were no rules to abide. The agency just pointed Carter in the right direction, then he started to take a few steps back as he saw how Carter could walk on his own. Docile test subjects were exchanged for real, live spies. People that played a role in the troubles outside the facility. Carter shouldered this new role - Project Awakening took form, and on paper Carter described it as "experimental interrogation". It was approved and over a few months, nobody knocked on his door. Screams and moans filled the corridor outside his lab, but wars skew people and what they accept - as long as the enemy is kept at bay. The fluorescent lights flickered more and more often. Electro-convulsive Treatment became a standard dish on the menu. Prisoners held at the facility begged the guards to take them to any other lab but Carter's. Rumours were disregarded in the beginning.

Over the years, Carter became known as The Doctor and no one ever questioned if he had even held a medical certificate or even what happened to the prisoners after they had given up their information. It was only after the Léry's Memorial Institute went silent for a week that they finally uncovered the true horror of what had happened there.

Carter's experimental information extraction had turned to horrific and bizarre torture. Patients and prisoners were found dead or in vegetative states with all types of head trauma. In his office, they found the most terrible discovery of all. Mr Stamper himself, his head peeled open and an array of electrodes and sensors inserted into his still working, but annihilated brain. There was no sign of Herman "The Doctor" Carter, but his research papers suggested that he had been using the prisoners as part of awful ECT experiments as he searched for the panacea of mind control.

The government didn't want to know. The black site was condemned and all knowledge of the Léry's Memorial Institute redacted forever.

Additional information can be found in the Madness

There are currently 3 Achievements related to The Doctor.

For more go to the Doctor's Gallery