She was introduced as the Survivor of CHAPTER XIX: All-Kill, a Chapter DLC released on 30 March 2021. 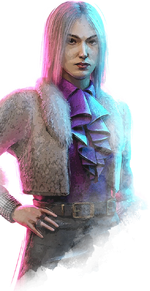 Yun-Jin Lee is a self-interested music producer, able to advance her goals during turbulent times.

, allow her to improve her abilities when others are harmed, and quickly escape from a chase. 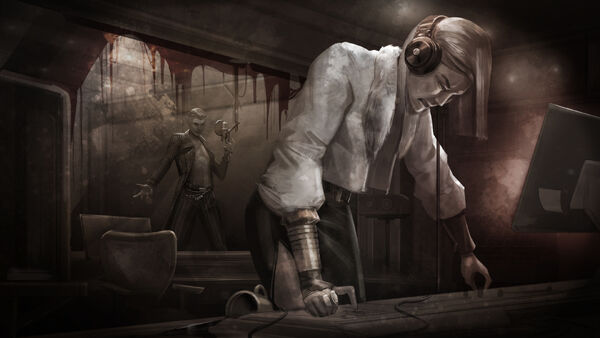 Additional Lore can be found in Tome IX - Crescendo: Chorus of Lies.

Resilient and ambitious, Yun-Jin was born into a life of hardship finding success in the music industry after years of effort and self-sacrifice.

As a child Yun-Jin was fascinated by sound, mimicking drums, and hitting keys on the piano. When she turned ten, however, she lost her instruments. Her family was heavily in debt and did not make the payments in time. The creditors took everything they owned, including the house. Yun-Jin held her four-year-old sister tightly as she cried. They moved into a windowless, two-bedroom basement. Since her parents worked day and night to pay their debt, Yun-Jin became her sister's caretaker. Every night she sang until they both fell asleep.

At seventeen, the renowned record label Mightee One Entertainment came to her high school to audition talent. She was rejected as an idol trainee but obtained an unpaid internship at the studio. For the following years, she created some of the studio's biggest hits, without any credit or recognition. To get her dues, she emerged in the public eye wearing flamboyant fashion and put soundbites into her songs that looped her artist name, Magnum Opus. Fans began to recognize her songs and she became the producer of NO SPIN, a poorly performing boy band who needed her special touch.

Dissatisfied with NO SPIN's commercial sound, she sought a rogue element to make the band stand out. Through her contacts in talent shows she found the edgy, raw sound of Ji-Woon Hak. She re-launched NO SPIN with Ji-Woon as its newest member. Within hours their first video was a viral sensation.

Their success cemented Yun-Jin’s reputation as a shrewd producer. Adorned in high fashion to attend luxurious events, Yun-Jin's harsh, impoverished childhood seemed far behind her. She moved into a penthouse and dined with socialites in skyline restaurants with breath-taking views of Seoul.

The success of the first album broke records, setting the bar high for NO SPIN's second. As they were recording new tracks, the fire alarm suddenly blared. Concerned for her safety, Yun-Jin hurried to evacuate the building and left the dallying staff behind. Only when she bolted out into the street that she realized NO SPIN was nowhere amongst the coughing crowd. A goliath of flames engulfed the building, slowly tamed by the steady streams of fire hoses.

All members of NO SPIN perished in the fire except one: Ji-Woon. The album was ruined. The band was over. She would be shelved while Ji-Woon would rot away as an instructor for idol trainees. But she refused to be a victim who watched helplessly as vultures swooped in to take what was hers.

Unknown to Mightee One Entertainment, she created new tracks to re-launch Ji-Woon's career. She pushed him to tap into his grief and create a song exploring the pangs of sudden loss. The music video showed Ji-Woon saying goodbye to each member of NO SPIN. Yun-Jin cleverly launched the song under Ji-Woon's newly adopted stage name: The Trickster. He would embody both fear and awe like the legendary dokkaebi spirits.

Ji-Woon's song was a global phenomenon, its universal themes of grief and guilt resonating internationally. Together, Yun-Jin and The Trickster toured the world. Success greeted them on every shore. Yet disturbingly, so did a series of eccentric murders. This connection unsettled Yun-Jin as she noticed that the tour dates coincided with the victims' time of death. She was weary after the loss of NO SPIN and anxious to preserve her artist, so she increased the Trickster's security detail. What if the serial killer was an unhinged fan fixated on the Trickster, inspired by the artist's morbid songs?

Returning to Seoul, Yun-Jin worked with Ji-Woon on his new material. When she entered the studio at the brink of dawn, she was surprised to see Ji-Woon already there. He seemed exhausted, like he had worked all night. When she listened to his track, she discovered a bizarre intro filled with shrieks and snares. It was too experimental for her taste.

A week later, another death was reported. The body showed traces of torture and was arranged in the same flamboyant style as previous murders, this time diamond Cufflinks gouged into the eyes victim's eyes. The following day, the victim was on every television channel. A video from the victim's social media showed her squealing, surprised when her boyfriend handed her a heart-shaped, birthday cake. Yun-Jin's stomach churned. That voice. So familiar. And yet, she had never met the victim.

The next morning, her heart froze when she listened to the Trickster's opening track. The shrieks in his song matched the victim's squeal. Did he sample the victim's birthday video? No, that was impossible: he had recorded this song before the murder was reported. She stared at Ji-Woon on the other side of the booth's glass window. He was NO SPIN's only survivor. Everyone else was dead. Not to mention the eccentric murders that matched his tour dates. Death trails that seemed to converge... to him.

If he caused... this, no artist would survive the scandal. Yun-Jin's career, no, her life would be over. All she had would be destroyed. A wave of nausea surged over her. Heart racing, she rushed to the restroom. Wild thoughts blazed through her mind as she splashed icy water over her face. There had to be a simpler explanation. Perhaps she was overworked. Or maybe, she did not trust her success. Her mind was fabricating this suspicion because disaster was easier to trust than success. It was all in her head. She returned to the recording booth, eager to put her worries behind her.

Months later, pressure came from Mightee One Entertainment executives. Revenue was down and they blamed the Trickster since they disapproved the violent themes in his music and the knife tricks he pulled during performances. While Yun-Jin was furious they scapegoated her artist, she agreed that Ji-Woon's sound was too niche to generate profit. She told Ji-Woon she fought them off but was ultimately outnumbered. Because of her initial fury, he believed her to be on his side. They were given three months to create and perform the next hit for Mightee One.

Months flew by and the time came for Yun-Jin to take a seat at the executives' private show. She was confident about her song but as soon as the music started, she knew something was amiss.

Dense, foul smoke permeated the room. Yun-Jin coughed and gasped for air. But the more she coughed, the more she inhaled. Her body sank in the chair, her limbs heavy and numb, and her eyes widened as she watched, terrified, a nightmare come to life.

The Trickster was a whirlwind of blood, slashing, stabbing, and chopping limbs. The executives were carved up like meat. They could not run. They were stuck, like Yun-Jin, paralysed. A boiling rage swelled in her gut. How could she have denied her instincts? The fire. The murders on tour. It was him. It had always been him. And she had known from the start. Now her career was over, and so was Mightee One. Everyone she had worked with, her colleagues, her friends, dying before her eyes. Everything she had, taken from her once more.

No, she would not let him. He would pay. He would know her suffering. Suddenly, dark coils of black fog rose from the ground and she was... somewhere else.

Bright lights flashed and blinded her. A spotlight found her in the darkness. Then a crowd erupted, chanting her name. "Magnus Opus! Magnus Opus!"

She smiled and welcomed the darkness within.

There is 1 Achievement related to Yun-Jin:

Players can choose from a variety of Cosmetic options to customise Yun-Jin: