He was introduced as the Survivor of CHAPTER XXIII: Sadako Rising, a Chapter DLC released on 8 March 2022. 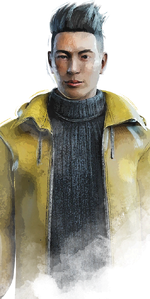 Yoichi Asakawa is a brilliant marine biologist and psychic whose knowledge and abilities allow him to protect himself and assist others.

, allow him to hide from Killers, call out to injured Survivors, and help others move faster. 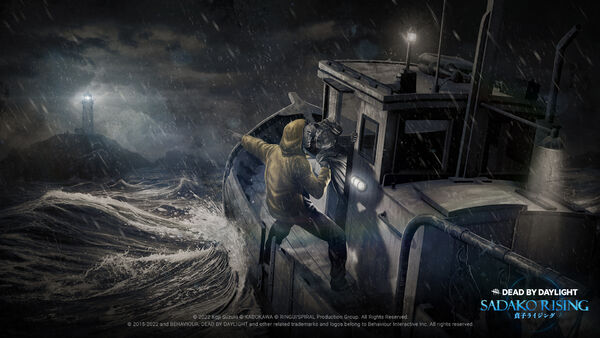 As a child, Yoichi gained an interest in the supernatural from his father and mother when an inexplicable curse claimed both their lives. As an adult, Yoichi graduated with top honours in marine biology from a university in Tokyo, and, following in his father’s footsteps, became the youngest professor in the school’s history. But his career began to unravel when two of his students disappeared while doing research in Izu Oshima. The mere mention of Izu Oshima triggered painful memories from his past. Deep, hidden memories bubbled up from the murky, black depths of his subconscious. Blurred faces on images, twisted mouths, inexplicable deaths suddenly filled his mind. The shouts of people calling him a monster. And then… the monster… Sadako rose from the abyss to let him know the curse was not over. It would never be over.

With a cry, Yoichi shut his eyes and slowly released his fear. When he opened his eyes again, Sadako was gone, but something had returned. Something ominous and otherworldly. He could feel an unnerving presence near him, breathing deeply like the heaving sea. Was Sadako tormenting him? Was a spirit trying to warn him? Or was it something else? Something that consumed people. Something that made people disappear. Yoichi wasn’t sure. He had spent his life trying to understand his psychic abilities and the supernatural. His instincts told him the answers somehow lay with water. He had, after all, dedicated his life to studying intelligent life and unexplored realms within the ocean. Perhaps he needed to readjust his definition of intelligent. Or his definition of life.

Thirsting for truth, Yoichi entered a frenzy of research into the fringes of parapsychology, cryptozoology, theology, folk history. The more he expanded his field of expertise, the more he was ridiculed and ostracized. Once viewed as a brilliant young mind, Yoichi was now considered an eccentric and a liability. In mere months, the university terminated his position. Undeterred, Yoichi sought professorships at other schools, but no reputable college in Japan would take him. As a last resort he approached media outlets, and by some twist of fate, the company where his mother had worked at as a journalist offered to fund his research in exchange for articles and first publishing rights to his story.

During this difficult time, Yoichi's father returned to him—his spirit silently goading him to continue the course he had chosen. And so, working around the clock in his tiny Tokyo apartment, he allied himself with other researchers in the paranormal field. Within months, he came across a story that mirrored the disappearances of his students: four vloggers had mysteriously disappeared near a lighthouse in Scotland. With a great sense of urgency, Yoichi took the first flight he could to Glasgow. A professor at a local university had come to many of the same conclusions as he had nearly seventy years earlier when a film crew disappeared near the very same lighthouse. There was some kind of intelligence in the water—some kind of darkness calling from the sea like an ancient siren. As Yoichi examined the research, his father suddenly appeared to let him know he was on the right path.

Guided by his father, Yoichi chartered a fishing boat and headed toward a small cluster of islands known as the Seven Hunters. Darkness fell as they approached the isles. The lighthouse, now automated and controlled remotely, sputtered and winked out of existence like a dying star. The ocean began to stir violently, lightning flashed, and the fisherman begged Yoichi to turn back, but Yoichi refused. He was too close and would not be deterred. As they argued the ocean raged and tossed the ship high and low. Then one giant wave lifted the boat as high as a house and dashed it to pieces against dark, jagged rocks.

Yoichi didn’t remember much after that. He remembered falling into the water. He remembered swimming to the landing where he saw his father standing on the gallery of the lighthouse beckoning him. He remembered staggering through thick black fog as he climbed the stairs. He remembered the water level rising with every step until the frothing mouth of the raging ocean swallowed him whole.

There is 1 Achievement related to Yoichi:

Players can choose from a variety of Cosmetic options to customise Yoichi:

Yoichi is part of 1 DLC: