Victor & Charlotte Deshayes or "The Twins" are one of 26 Killers

They were introduced as the Killer of CHAPTER XVIII: A Binding of Kin, a Chapter DLC released on 1 December 2020. 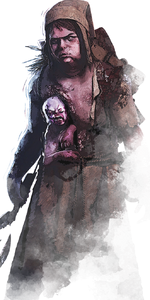 The Twins are a cooperative pair of Killers, able to divide and hunt together using their Power, Blood Bond.

allow them to monitor Survivors' actions, impede their progress, and hunt more effectively. 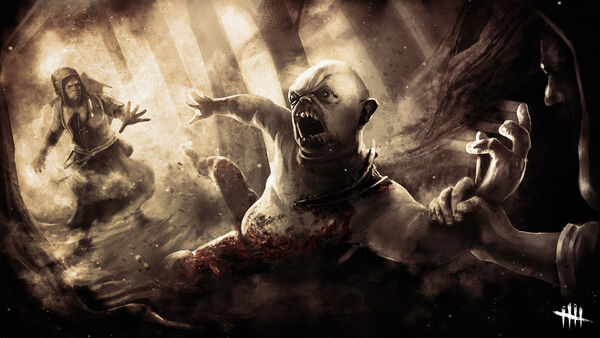 A pair of conjoined twins, Charlotte and Victor Deshayes formed an emotional bond like none other. The unlikeliness of their successful birth in the 17th century could be described as miraculous, yet it immediately brought about their life of persecution. The twins emerged with Victor's lower body affixed into the chest of his sister, legs twisted around her muscles and organs. He was smaller than Charlotte, grown as if he were an appendage of her body rather than a fully formed boy. As the new-borns screeched, so too did the midwife who delivered them, running from the home, yelling of a demon birthed by a witch. So began the hunting of Charlotte, Victor, and their mother Madeleine.

The coming years were fleeting memories for the twins, yet they were the closest thing to a normal life they would know. The journey with their mother was what they believed all children underwent, the games of running and hiding through France's countryside being an ordinary occurrence. At the age of five, a new challenge to the game was presented as their mother fell ill. Pale and exhausted, Madeleine had no choice, but to pass responsibility of collecting food onto Charlotte. The girl, burdened under extra clothing that concealed Victor's protruding body, set out from their forest tent and marched to the nearby town. Though a peculiar sight, she did what she had been trained for, waiting for an opening at the market and swiping whatever food she could. It was a victory in the game, but one short-lived.

After midnight, glowing flames surrounded the family's encampment, bobbing through the darkness. A single commanding shout broke the night's silence and a mob of witch hunters streamed in. Grubby hands tore the twins from their bed, Charlotte frantically kicking all who approached. Madeleine cried for her children, her voice abruptly silenced by a club to her skull. Victor shrieked, the wailing of a trapped rat.

The hunters coordinated quickly. A judge on-hand declared Madeleine guilty of witchcraft, evidenced by her demon spawn. Within minutes, they shackled her unconscious body to a tree, surrounding her feet with dry twigs and moss. As she awoke, she did not struggle, only begged her children to turn away. They would be given no choice. The twins were forced to watch as the torch was lit, and they watched as flames leapt up their mother's skirt, charring and sizzling her flesh. They watched as fat dripped from her body, and her face bubbled and twisted. They watched until the screams that tore her vocal cords were no more, and all that was left was the crackling of embers and a nauseating stench.

Whatever joy and goodness were in them died with their mother. Caged and transported to an old wooden temple, they were sold to a secretive group clad in dark cloaks. Victor reacted with the ferocity of a rabid beast at any who approached, clawing and biting. The only solace that could calm him was the embrace of his sister. Charlotte, bitter and hateful to all but her brother, found purpose in being his protector.

Within the temple, they were exposed to unusual experiments — some cruel, many simply baffling. One day they would be made to break the neck of a small grey bird. The next, they would bleed their fingers into a vase of roses. Every seventh day, they would sleep with the branch of a damp oak beneath their pillow. Then there was the chanting: a never-ending chorus from cloaked figures on scheduled intervals.

In time, a final experiment was planned. Two robed figures herded the twins to the centre of the temple, holding Charlotte upon an altar in a room lit with candelabras. The wrinkled face of a man peered from under his hood, placing a hand on the forehead of each twin, making careful examination of their skulls. Memento mori, he uttered, as he withdrew a shining blade.

Charlotte rolled to her side, shifting her brother off the altar. With a screech, he stretched his arm as far as he could, knocking a candelabra to the ground. The flames took to the dry wood immediately. They swept over the floor, igniting the black robes that brushed against it. Screams of agony pierced the chaos, invigorating Charlotte. She dashed through the inferno, vision concealed with nothing, but black smoke and blazing flame. A painful heaviness filled her lungs. No exit could be found, every step leading to overwhelming heat. She fell to her knees, suffocating, and then saw it — sunlight, trees. She stumbled from the fire into dewy grass. Without looking back, she ran into the forest until she collapsed.

When Charlotte opened her eyes, she reached for Victor's hand. He made no attempt to budge. His body hung helplessly from her torso. She clasped his face, stared into his sad, still eyes. The movements she was accustomed to — his body pulling at her skin, his legs prodding at the cavity in her chest — were no more. Victor was dead.

Charlotte had no choice, but to continue moving as she mourned, fearing black cloaks and witch hunters were prowling. She concealed her brother's corpse under her clothing and marched for the sewers of a nearby city. There, she set up camp, emerging often to steal whatever food she could, resorting to raiding barns for pig slop when desperation set in. Throughout the years, Victor's corpse rotted as his limbs oozed and blackened, yet his body demonstrated resistance to complete decomposition, as if his sister's blood still coursed through him. Protecting his lifeless body became Charlotte's sole reason for being, refusing to ever be separated from the only family she had left.

Life into her teenage years was a game of survival. Her hatred for humanity grew each day under the realisation they would never leave her be. No matter how many died during her botched robberies and desperate attempts to escape, there would always be more to pursue and sling words of condemnation at her — monster, demon, witch. And it was the black cloaks who were the worst of them. Their hunt for her was unending, forcing her to constantly abandon shelter and run.

For years, Charlotte fled, drawing blood out of necessity, cradling her long-dead brother in the night. During a frigid winter, her body began to break down. Food was scarce and the refuge of rickety shacks were no use against freezing temperatures. Sickle in hand, she sheltered near her campfire in the woods, not knowing if the black cloaks would take her before the cold did. As frost crystallised around her nostrils and her lips took on a gentle blue hue, Charlotte felt something she had never experienced: acceptance. She closed her eyes, opening herself to the serenity of death when — a shriek, shrill and vicious pierced her ears. Victor spasmed and flailed from her chest, a cloud of fog encompassing him. Before she could react, he spilled from her in a bloody puddle, landing on the snow and running.

Pulling herself from the edge of death, she gave chase. Calling his name, she ran through the forest until her legs could hardly carry her, until finally, within her view, was Victor, sitting at the edge of a thick fog. His face, twisted and feral, screamed as a dark hooded figure emerged from the fog, grabbed his arm, and seized him. The serenity that had crept into Charlotte was extinguished, replaced with the seething hatred and rage she had depended on for so long. With a tight grip on her sickle, she charged into the fog, prepared to eviscerate any who set foot near her brother.

The Twins come with 3 Perks

Progressing through The Twins' Bloodweb

The Blade of Marseille is the Primary Weapon of The Twins.
Tales warned of a demon who skulked the gutters of Marseille with a shimmering blade in hand.
In reality, it was a battered sickle Charlotte stole from a farmer's home and modified to her liking.

There is 2 Achievements related to The Twins:

Players can choose from a variety of Cosmetic options to customise The Twins:

The Twins' are part of 2 DLCs: