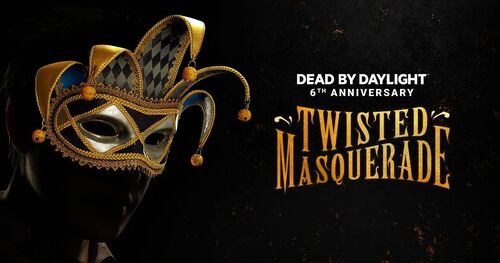 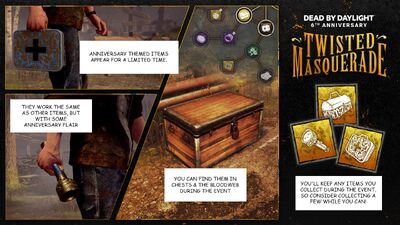 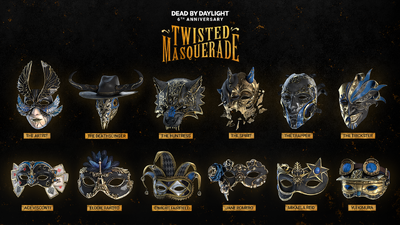 As the name of the Event implies, the Twisted Masquerade would add several unique Mask cosmetics for a select few Characters that could be unlocked during Trials when collecting an Invitation Scroll, reusing the Crown Pillar mechanic of previous Anniversaries.

, the Event Tome is made up of a mix of regular Survivor and Killer challenges, as well as some Master Challenges.
Additionally, however, some of nodes in the Auris Web will unlock a Cosmetic Piece as a reward for participating in the Event Tome.

The Event Tome features 2 Tome Levels, each with two separate paths through the Auris Web:

This marks the upper path of the Auris Web.
It features challenges that will add their progression to a community-wide goal.

This marks the lower path of the Auris Web.
It functions like a regular path through the Auris Web like in any other Tome.

As a thank-you for celebrating playing Dead by Daylight, over the Twisted Masquerade, logging in will reward Players with a total of 300,000 Bloodpoints, 4,500 Iridescent Shards, 35 Rift Fragments, as well as a first-time log-in reward of 600,000 Bloodpoints: