The Midnight Grove was a Halloween Event in Dead by Daylight

that was scheduled to take place between 21 October and 4 November 2021, but received an extension to 11 November 2021.

It kicked off the in-game celebrations in honour of Halloween 2021. 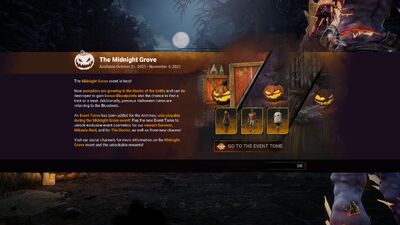 The Midnight Grove is a type of Halloween-themed in-game Event, which temporarily adds new Objectives to the Gameplay of Killers and Survivors.

As a first for an Event, it opened a unique Tome in the Archives, with special Challenges to complete, unlocking unique Lore entries written by the newly arrived Survivor, Mikaela Reid, herself. 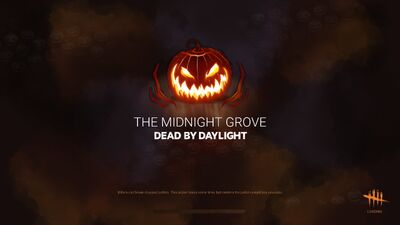 one receives from interacting with them.
Not burning the Offering will still grant Bonus Bloodpoints, but fewer.

The Pumpkins can be stomped on by the Survivors or the Killer, and will grant Bloodpoints and/or a status effect, based on what kind of Pumpkin it was.

The Event is accompanied by a one-time Log-in Reward of 666,666 Bloodpoints during the Event period. 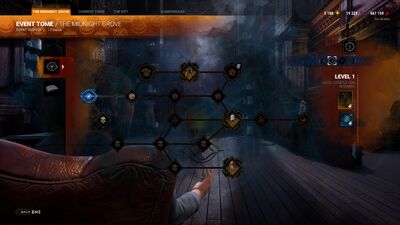 The Midnight Grove Event is the first Event to be accompanied with a special event-themed Tome, that is separate from the regular Tome, but also grants progress in The Rift.
Completing its Challenges rewards Players with special Cosmetics, as well as unique Lore entries written by Mikaela Reid