The Hallowed Blight was an Event in Dead by Daylight

It kicked off the in-game celebrations in honour of Halloween 2018.

The Hallowed Blight is a Halloween-themed version of the Scorching Summer BBQ Event.

It was teased by the The Hallowed Blight Teaser on the Developers' Instagram on 1 October 2018 and another Teaser on 9 October 2018. 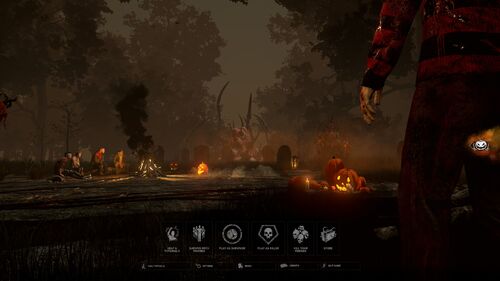 The Nectar Vial acted as a meter, which was filled by interacting with the Event Objectives. A filled Nectar Vial would grant the Player 1 Putrid Serum.

The Vial had 3 Markers on it, which were only important for Survivors as they could lose partially collected Nectar upon death. The Markers were set at one third, two thirds, and full. Any amount of Nectar that did not fill the Vial to the nearest upper Marker would be lost. Any Nectar that already filled a Marker, however, would be safe.

The Putrid Serum acted as a currency, which was obtained by filling Nectar Vials. It was exclusive to the The Hallowed Blight Event and would expire shortly after it ended.

It could be used to purchase Cosmetic pieces of the new Event Outfits.

The maximum amount of obtainable Putrid Serum were 60 Vials, enough to unlock 2 complete outfits or 6 individual pieces to your choice. In order to obtain 60 Vials, Players originally had to play equal parts Survivor and Killer as either side was capped at obtaining only 30 Vials. This was eventually opened after many complaints of atrocious Killer queue times, making it nearly impossible to obtain enough Vials within the Event time frame.

The Event featured personal Challenges that required the Player to fill Nectar Vials in order to unlock Putrid Serum with which they could then buy the Cosmetic Rewards.

Each Map spawned with 2 Visceral Cankers and 2 Cankerous Hooks by default.

The Player could find and burn a new Offering called the Pustula Petals, calling upon The Entity

The Player filled the Nectar Vial when they harvested Visceral Cankers or hooked Survivors for the first time on Cankerous Hooks to extract Putrid Nectar. They also gained bonus Bloodpoints

for doing so. All bonus Bloodpoints were awarded post-trial during the tally screen and only if the Player had burnt a Pustula Petals

Offering. Survivors would lose any Nectar that was not filling the Vial up to the nearest Marker upon death. Any Nectar that did was safe, however. Survivors who burnt the Offering would receive the bonus Bloodpoints from harvesting a Visceral Canker even if it was harvested by another Survivor.