Talbot Grimes or "The Blight" is one of 28 Killers

He was introduced as the Killer of CHAPTER XVII: Descend Beyond, a Chapter DLC released on 8 September 2020. 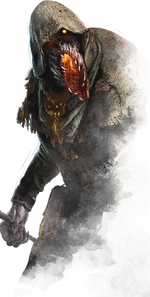 The Blight is an unpredictable Killer, able to rush forward in a burst of speed and carom off obstacles to injure Survivors using his power, Blighted Corruption.

allow him to impose powerful effects on Generators, Totems and Pallets. 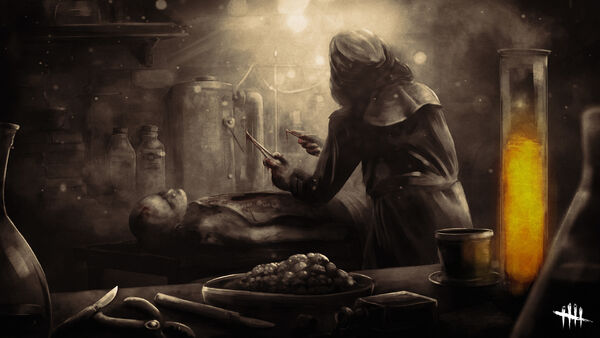 Additional Lore can be found in Tome I - Awakening: The Hunger and Tome V - Unleashed: Doors Unknown.

To understand the human condition, one must rise above it. This was the credo of Talbot Grimes, a Scottish chemist whose unrestrained ambition took him to towering heights. As a boy, he was a popular child—bright, charismatic, and unafraid to challenge authority—yet despite his social graces he was fiercely independent, spending much of his time exploring the sprawling fields near his town alone. What began as a child's curiosity nearly turned deadly after experimenting with a patch of poisonous foxglove. For days, he laid in bed dripping with sweat, purging any food that touched his stomach. When he recovered, it wasn't fear that gripped him, but fascination. There was something magical in how a single flower could so drastically affect him.

Into his adult years, his ambition developed as quickly as his questionable methods. He attended the London School of Medicine and excelled despite several reprimands. His willingness to push the limits secured him a position with the British East India Company, and within seven years he was made head chemist. In time, he completed one of his greatest achievements: a chemical that could increase a worker's productivity while reducing their need for rest. He was rewarded with a secret laboratory beneath a prison camp on Dyer Island.

There, off the coast of India, prisoners from the Opium War became his unwilling subjects, leading to a drug that allowed soldiers to withstand incredible amounts of pain. Though most side effects were minor, there were rumours that a small number of soldiers went mad. In feral states, they massacred villages, impaling the populace on bayonets, leaving them hanging from trees. There were no official reports on the subject, and Talbot refused to blame himself for what could only be exaggerated war stories.

Though his callous brilliance seemed unflappable, he was ignorant to the enemies his questionable work had amassed. The realisation struck him quite literally—with a steel pipe to the back of his head during a trip to Mangalore. He was bound and loaded into a wagon. When his blindfold was removed, a sickly man showed him a mass grave filled with hundreds of bodies. Unbeknownst to Talbot, his productivity-increasing drug had killed nearly an entire factory's worth of workers. He knew he couldn't defend himself against the anger and accusations of his abductor—all he could do was curl up as the blows from the steel pipe rained down. His body was thrown into the grave and left for dead. Shifting between consciousness and the darkest black, he crawled for an escape, fingers sinking into rotting flesh. Black flies feasted on his uncovered skin, the sensation of a hundred pin pricks stabbing into him. As he collapsed, he came face to face with a dead woman's dazzling hazel eyes. Too weak to pull away, he could do nothing but witness his life's work.

Then, from the edge of death, he was brought back. He found himself on a small bed as a kindly, wrinkled face looked over him. With each pained breath, he was nursed back to health in an ancient mystery school posing as a monastery. In verdant gardens behind tall, unassuming walls, monks studied forbidden texts, striving to expand the human mind in the search for other dimensions—believing one to be connected to the other.

Talbot's knowledge proved indispensable, his mind-altering chemicals integrating seamlessly with theories of neural expansion. He realised then that his salvation was no coincidence—he was plucked from the pit specifically to advance the school's knowledge. He agreed to help until his recovery was complete, being tasked with researching what the monks called the soul chemical, a compound derived from the pineal gland that could open the mind's eye. What began as a favour to his saviours, soon became an obsession. Poring over the school's archives of lost texts, he uncovered scientific formulas that confirmed previously unthinkable ideas. He dreamt of ushering humankind into a new period of enlightenment. Perhaps then, the nightmares of hundreds of dead factory workers—and of those two hazel eyes—would fade from his mind.

As he came closer to a breakthrough, the demeanour of the monks shifted. The gentle smiles they offered were paired with uneasy eyes that quickly darted away when spotted. The polite conversations he was once privy to turned to hushed murmurs. The last thing he would see of the school was the cracked ceiling above his bed, branching like a dendrite through plaster.

His next memories were a shattered mosaic of images and sensations. Smearing lights, horse hoofs on cobblestone, coarse burlap scratching at his cheeks, and sharp bites into his arm. He awoke ragged and unwashed, splayed on the straw mattress of an opium den. Mind in a dense fog, his first thought was of his notes, the only record of his groundbreaking revelations. He searched frantically, scrambling through the dingy basement, pleading aloud for help. The few other denizens looked up from their hammocks, offering nothing but drug-soaked eyes and apathetic gazes that soon fell into half-slumber. Before he noticed the robed figure appear behind him, a needle plunged into his arm and the world disappeared once more.

Awoken. Again. Each time, hazier than the last. He tongued at hollow gaps between his teeth. How long, he wondered. A faint memory returned. The soul chemical. His notes. The verge of a breakthrough. A faraway whisper entered his mind.

He fumbled with a stone, sharpening it with shaking hands. In the dim light of the den, amongst the catatonic occupants, he carved his research from memory into the walls. He wrote for hours until his fingers bled, moving to the floor, taking in everything the voice whispered despite his inability to comprehend it. When there was nowhere left to write, he gripped the stone and carved the message into his chest. Stained with blood, he witnessed a miracle appear before him—a magnificent field of lush, orange flowers. The whispered voice beckoned to him, urging him to enter the field and discover worlds and dimensions beyond human comprehension. For a moment, Talbot felt the sense of wonder he possessed as a child.

The denizens of the opium den awoke to silence, the dry scent of smoke still lingering in the air. Shambling out of their drug-hazed fog, they found the stone floor wet with blood, tiny rivulets coursing through the cracks. As eyes adjusted to the darkened room, the jagged lettering scrawled along its length began to appear. Written over and over without end, there was but one single line: Death is only the beginning.

The Blight comes with 3 Perks

Progressing through The Blight's Bloodweb

The Bonebuster is the Primary Weapon of The Blight.
An elegant accessory, specially weighted to deliver a deceptively brutal blow.

NOTE: based on in-game observations, it appears that in addition to the comparatively low values in degrees per second mentioned above, other unknown variables must also factor into The Blight's final Turn rate during a Rush, as it appears to be greater than just the values mentioned above.

There are 2 Achievements related to The Blight:

Players can choose from a variety of Cosmetic options to customise The Blight:

The Blight is part of 2 DLCs: