Steve Harrington is one of 31 Survivors

He was introduced as one of two Survivors of CHAPTER 13: Stranger Things, a Chapter DLC released on 17 September 2019, which remained available until the Chapter's departure from Dead by Daylight on 17 November 2021.

He originated from the 2016 Sci-Fi-Horror Web Television series Stranger Things.

He remains a playable Character for all Players, who had purchased Steve prior to 17 November 2021.
He cannot be purchased anymore and was removed from the in-game Store.
The only way to still unlock Steve retroactively is by using an existing code for CHAPTER 13: Stranger Things, which still exist in limited quantities, such as as a physical copy of the DLC or a DLC-bundle for Console. 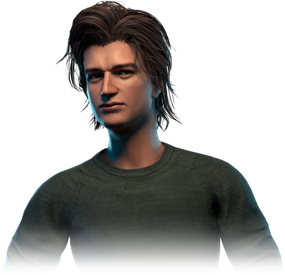 Steve Harrington is a former jock, able to protect and support his fellow Survivors while providing his own brand of humour.

, enable him to distract Killers, tolerate pain, and get back into the fight.

Popular and arrogant, yet compassionate, Steve Harrington is an unlikely mentor and leader.
He often acts as a surrogate big brother to a younger boy named Dustin.
He even helped him find his slimy inter-dimensional pet Demogorgon, D'Artagnan.
His reputation as a protector grew and he soon became a sort of "babysitter" for a group of kids in Hawkins with a knack for messing around with strange and dangerous things.
His courage is unmatched so that he was even able to fend off a Demogorgon when it threatened his friends.
One evening he received a call for assistance from his friend Nancy Wheeler.
He drove all the way to the Hawkins National Laboratory to see if she was okay.
He searched the area but only found her notebook.
Before he realised what was happening the ground opened up and a swirl of black mist filled his eyes.
When he awakened he was in a strange place that seemed familiar but unfamiliar at the same time.

that were unique to him until the departure of the Chapter from Dead by Daylight:

With the Chapter's departure from Dead by Daylight, there are no Achievements related to Steve anymore.

Players could choose from a variety of Cosmetic options to customise Steve:

Before Steve's departure, the following In-Game Store options were available:

Steve had 1 alternate Character model available in the in-game Store until the Chapter's departure from Dead by Daylight:

Steve was part of 1 DLC: