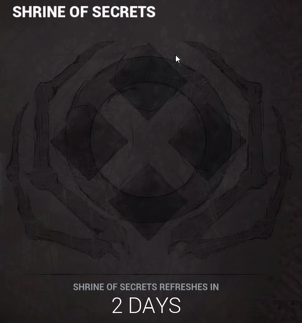 An empty Shrine of Secrets

The Shrine of Secrets is used to unlock Teachable Perks

for either the Killer

With the Shrine of Secrets, Players can unlock all Teachable Perks of the currently 22 Killers and 24 Survivors (DLCs included) without having to level all those Characters

The Shrine of Secrets was released with Patch 1.2.0.

The Shrine has a selection of 4 usually randomly chosen Perks that can be bought. The selection is the same for all Players on all Platforms. Usually, once a Perk has been on the Shrine, it cannot re-appear in it for the following 3 Shrines. The first exception to this happened on the Shrine of Week 45 of 2020, when the Hillbilly

re-appeared after appearing the week before it.

During a Rift that features DLC Characters, the Shrine of Secrets overlapping with the opening of a Tome Level requiring DLC Perks to complete Master Challenges with will be guaranteed to contain either the necessary Teachable Perks or a random Teachable Perk of one of the four Characters whose Lore is expanded upon in the accompanying Tome.

This first occurred for Tome II - Reckoning, which contained the following Perks:

(BP). They are bought with Iridescent Shards

(IS). The Shards are obtained while playing ranked games, this excludes the Kill Your Friends mode, and increasing the Player Level.

When a player buys a Teachable Perk from the Shrine, the Perk will from then on be unlocked in every Character's Bloodweb

This means that when buying a Unique Killer Perk, all the Killers will then be able to unlock that Perk in their respective Bloodwebs. This takes away the necessity for players to spend lots of Bloodpoints on a single Character, levelling them to Level 40 in order to obtain all their Teachable Perks the regular way. When a Perk has been bought in the Shrine, it will no longer show up in the original Character's Bloodweb when reaching the required level.

The Shrine renews itself every week with a new set of randomly chosen Teachable Perks. This makes it possible for a player to theoretically obtain a maximum of 4 Teachable Perks per week.

For a list of the number of times every Teachable Perk has appeared on The Shrine of Secrets so far, please refer to the Shrines of Secrets Archive

Past Shrines of Secrets

Prior to Patch 2.0.0, Iridescent Shards