Sally Smithson or "The Nurse" is one of 29 Killers

She was introduced as the Killer of CHAPTER 1: The Last Breath Chapter, a Chapter DLC released on 18 August 2016. 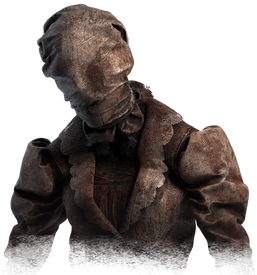 The Nurse is a warping Killer, able to blink through obstacles and quickly close gaps with her Power.

, and A Nurse's Calling

, allow her to decrease Survivor abilities and track them when they are injured.

She is focused on spotting and tracking, making it harder for Survivors to hide.

Difficulty Rating: Very Hard
(These Killers require a high amount of practice and understanding, inexperienced Players are likely to find little success when using them) 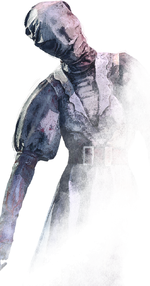 Additional Lore can be found in Tome 6 - Divergence: The Cleansing of Crotus Prenn.

Sally Smithson came to town with dreams of children's feet and laughter in a wooden home built by her husband Andrew. But life came not with smiles but with plans of destruction. Andrew worked as a lumberjack - a job with its perils. One day, Andrew's foreman had to pay Sally a visit, forever changing her life. She was alone.

Without food on the table and no other option, Sally had to find a way, but the only employment she could get was at the Crotus Prenn Asylum. Nobody sought employment there unless they were in dire need. Just like Sally. Without any education, she started at the bottom, doing the hard night shift.

Over the years, her mind had reached its limits, two decades of seeing horrid things that violate the eyes. Memories that are re-played every night. Being abused verbally and physically, by people without limits. Sally saw insanity from the outside, just to catch it herself.

Finally she could not take it any more and concepts of purification emerged inside her. She did what she felt was necessary. As the morning staff arrived one day in September - they found over fifty dead patients, lifeless, in their bed along four staff members, also dead.

Only Sally had survived the night, but her mind was gone, rocking back and forth non-stop. Exactly what happened is only known by her, but it seems that some of them had been choked as they had marks around their necks. They got her into an ambulance, but that ambulance never reached the hospital. It was found crashed in a nearby wood, all the staff dead and Sally nowhere to be found.

The Nurse comes with 3 Perks

Prestige The Nurse twice more to automatically add Tier II and Tier III respectively into the other Killers' inventories.

The Bonesaw is the Primary Weapon of The Nurse.
Rusty metal implement for tearing through flesh and bone.

SPENCER'S LAST BREATH:
Press and hold the Power button to charge a Blink:

Light Vulnerability:
Interacting with the Spirit World causes The Nurse to suffer from Lightburn, which leaves her vulnerable to bright lights:

Lightburn:
Due to her interaction with the Spirit World, The Nurse suffers from a unique mechanic called Lightburn, which makes her vulnerable to Flashlights

There are 3 Achievements related to The Nurse:

Players can choose from a variety of Cosmetic options to customise The Nurse:

The Nurse is part of 3 DLCs:

For more go to the Nurse's Gallery