Sadako Yamamura (Japanese: 山村 貞子) or "The Onryō" is one of 29 Killers

She was introduced as the Killer of CHAPTER 23: Sadako Rising, a Chapter DLC released on 8 March 2022. 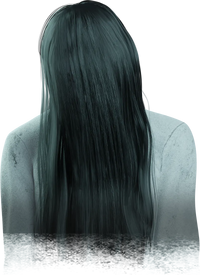 The Onryō is a vengeful ghost imbued with the power of Nensha, the Onryō is able to silently and invisibly traverse the Realm, manifesting when she is ready to strike. 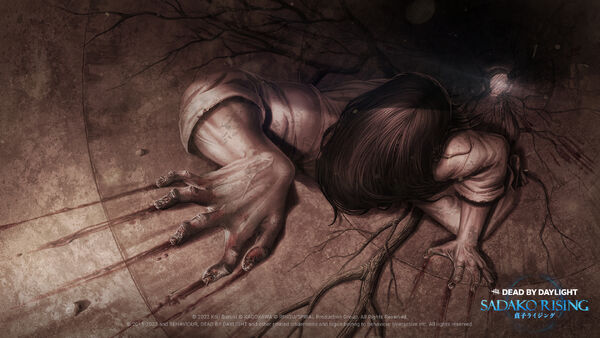 A powerful and lethal onryō, Sadako Yamamura was the daughter of a famed seer from Izu Oshima, Japan.

Her mother left many questions unanswered. In her hometown, sailors disliked the way her mother would spend days on the beach, her eyes fixed on the foaming waves of the sea. Some said, frolic in brine, goblins be thine--if you keep playing in the water, the monster will come for you.

Nine months later, Sadako was born. As a child, her immense powers seemed impossible to control and flared in anger. This became apparent when she was unable to control her rage during a public demonstration of her mother’s powers. When a journalist called her mother a fraud, Sadako’s powers surged, and the journalist collapsed on the floor, struck dead.

Then everything went wrong. Her mother passed away and shortly after Sadako was lured to an old, crumbling well. As she leaned over the rim, a long shadow fell over her. She turned and a sudden jolt of pain hit her over the head, cracking it open. Her vision dimmed and her mind swirled into unconsciousness. She felt two hands pushing her over the rim.

Pain exploded in her skull as she hit the cold ground. A grinding noise came from above and the well darkened, all light obscured like a midday eclipse.

Every inch of her body screamed in pain. Looking up, she saw the only way out. She dug her nails into the muddy ground and slowly crawled toward the cobbled wall. She gripped the stones to climb but had neither hold nor strength. Each time she clawed up a few inches, her nails slid against the wet wall and she slipped down. Her fingers gushed with blood as the coarse cobblestone tore off her nails and lacerated the flesh underneath. And yet she tried, again and again.

Decades later, the meadow became a resort, and a log cabin was built above the well. When a visitor rented the cabin, Sadako found an opportunity for revenge. She summoned all her nensha power and projected a terrible curse on a videotape that killed its viewer after seven days.

Her wrath was like the tides of a stormy sea, violent and unforgiving. As she plunged into a fury, a dark fog coiled at her feet. The sound of crashing waves echoed through the old stone well.

Suddenly, a tidal surge came crashing down on the cabin's walls, wrecking its logs into a torrent of mud and filth. The black current flooded the well underneath and swallowed Sadako at once.

When she opened her eyes, she stood on a desolate beach facing a vast, stormy ocean. A thick, black fog caressed the water's surface.

Sadako walked into a coming wave and slowly disappeared into the opaque fog.

The Onryō comes with 3 Perks

Prestige The Onryō twice more to automatically add Tier II and Tier III respectively into the other Killers' inventories.

The Ring of Fury is the Primary Weapon of The Onryō.
Her thirst for vengeance remained and nothing could stop her flooding rage.

Add-ons for Deluge of Fear

There are 2 Achievements related to The Onryō:

Players can choose from a variety of Cosmetic options to customise The Onryō:

The Onryō is part of 1 DLC:

For more, go to Onryō's Gallery