Rin Yamaoka (Japanese: 山岡 凜) or "The Spirit" is one of 29 Killers

She was introduced as the Killer of CHAPTER 9: Shattered Bloodline, a Chapter DLC released on 18 September 2018. 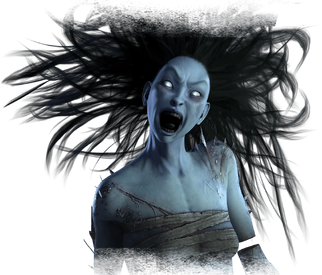 The Spirit is a phase-walking Killer, able to catch Survivors off-guard with her traversal Power, Yamaoka's Haunting. Her Power allows her to teleport from one place to another without being seen.

, give her tools to observe and bait Survivors, and deal with obstacles directly in her path.

She inherited incredible fury from her ancestors. The wrath that flows through her veins is her legacy. The terrible pain she suffered set it off. Swift and lethal, The Spirit exacts her revenge endlessly. 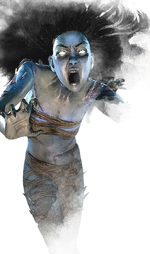 Additional Lore can be found in Tome 2 - Reckoning: Steeped in Blood.

Rin was the only child of the Yamaoka family. She was raised in the dusty halls of a traditional house in Kagawa. She studied Education at Takamatsu, a private university, which weighed heavily on her family's shaky finances. Her mother got ill that year and the bills started piling up. Rin worked part-time in a futile attempt to help lighten the load.

Her father faced a debt that grew without end. He started working double-shifts in hopes of obtaining a promotion. That's when he started losing sleep. A dark whisper would keep him awake all night, reminding him of his hopeless situation. Exhausted, he started to lose grasp of reality. Fighting to deny what the voice whispered at night, Rin's father made a desperate move. He met with his superior and explained his situation. He begged for a bonus, an advance, time-off---anything.

His request was denied. The company had launched a defective production line that was costing them dearly. Someone had to be held accountable and Rin's father fitted the bill perfectly. He was fired after twenty-two years of service.

That evening, Rin came home from work. She'd stayed late to entertain customers that lingered at the restaurant. As she parked her bike in the shed, she heard her mother's scream come from the house.

She rushed in, climbing up the stairs to her parents' room. There she found bits and pieces of her mother on the floor. Her limbs were clean-cut, tangled up in an unnatural position. Her breasts were sliced up, revealing her rib cage, which was cracked open. Rin gagged.

A sharp Katana came crashing down. Rin blocked the blade, which bit into her bare forearm. The shock of recognition interrupted her pain: her father was wielding the Katana with a stoic expression. She cried out to make him stop, but he slashed her arm again.

She rushed off and slid on the blood-smeared floor. Using the door frame as support, she raised herself up. The Katana ripped through the wall, cleaving her other arm. She screamed in pain as she limped into the hallway, only to be met by her father's blade.

She stepped back, trembling, as she held together the soft loose flesh of her abdomen. Images of her mother's tangled limbs flashed before her eyes.

Rin charged at her father, making him stumble back. He punched her torn abdomen and she recoiled in pain. As she struggled to get back up, he slashed her thigh, making her collapse on the floor.

As she crawled towards the stairs, he grabbed her hair and yanked her against a partition. The glass shattered on impact and she fell through, landing one floor down.

Coughing up blood, her chin grazed the glass, adding to the bleeding. A low-pitched heartbeat started to ring in her ears. Her body felt so heavy she could no longer move.

The ground shook with her father's footsteps. She knew she was not going to make it, but she no longer cared. She would make him pay, in this life or the next.

A dark Fog slowly veiled her eyes, but it could not subdue her rage. She would not rest--not yet. The darkness whispered, promising blood and revenge.

An oath was made and Rin closed her eyes.

Prestige The Spirit twice more to automatically add Tier II and Tier III respectively into the other Killers' inventories.

The Shattered Katana is the Primary Weapon of The Spirit.
A single-edged straight sword handed down from generation to generation.
The blade shattered after spilling the blood of her kin.

YAMAOKA'S HAUNTING:
Press and hold the Power button to charge Yamaoka's Haunting and initiate a Phase-Walk.
The Spirit will depart her physical body and enter the Ethereal Plane, leaving behind a stationary Husk.

There are 2 Achievements related to The Spirit:

Players can choose from a variety of Cosmetic options to customise The Spirit:

Spirit has 1 alternate Character model available in the in-game Store:

The Spirit is part of 2 DLCs: