Quentin Smith is one of 31 Survivors

He was introduced as the Survivor of CHAPTER 6: A Nightmare on Elm Street™, a Chapter DLC released on 26 October 2017.

He originates from the 2010 remake Horror Movie, A Nightmare on Elm Street.

Quentin Smith is a resolute Dreamwalker, increasing the survivability and recovery of his team.

His Perks focus on survival and helping others - providing a kind of support in this nightmare. 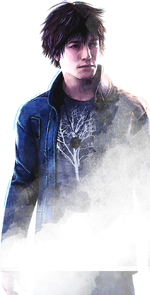 When he heard that Nancy's mother had disappeared, Quentin Smith knew instantly that their success had been short-lived. Although their plan had seemed to work flawlessly, Freddy Krueger had beaten death yet again.

But Quentin wasn't about to give up. It may take many attempts, but he vowed that somehow they would find a way to beat Freddy, once and for all. If he didn't, it would only be a matter of time before Freddy would win and Nancy was lost.

Someone like Quentin never attracted attention in a library, no matter how strange the texts he requested. He devoured all the information he could find, on shared dream worlds, lucid dreaming, and the methods to control the dream space. Forcing himself to stay awake, via a steady diet of pills and energy drinks, he searched through dusty volumes, finding myths about the demons that live in dreams, trapping their victims in limbo and feeding off their terror. He worked quickly as he knew that Freddy would soon be coming for him.

It wasn't long before that moment arrived and Freddy began appearing in his dreams. He stayed at the periphery at first, taunting Quentin, seemingly hoping to tire him out. Using all that he had learned, Quentin was able to see flaws in the dream; cracks where escape routes could be formed. He tested this skill carefully, not wanting to show his hand, hoping that it would give him some kind of advantage that he could use to defeat Freddy.

Then, one night, he found himself in the familiar environment of Badham Preschool. Freddy had tired of the taunting and had finally decided to gut him. Quentin ran through the school, his quick eyes scanning for something useful in the maze of rooms. He found a can of paint thinner and quickly formulated a plan. Once the trap was set, he waited, acting as the lure to draw Freddy into the right position. And there he was, claws scraping on metal as he closed in for the kill. Quentin allowed himself time to enjoy the surprise on Freddy's face as the corridor ignited and then he was away, running through the building, heading for the exit that he knew existed. If he harried Freddy, weakening him and then escaping the dream, surely that would defeat him over time? Before his eyes, the cracks in the dream closed and his escape route was blocked. He was in Freddy's secret room again, and there was nowhere to run.

As Freddy closed in, a broad grin spreading across his ruined face, Quentin was consumed with a need to see this man finally obliterated. He wished it had been him, not his father, who threw the gas can that ended Krueger’s life, that it had been him who cut Freddy's throat. Perhaps that desire would be enough? This was a realm of the mind after all.

He let it consume him, concentrating all his thoughts on wishing Freddy gone. His vision was obscured with roiling tendrils of fog and, when it cleared, he was somewhere else. In another dream? If so, it wasn't his; it felt cold and unfamiliar.

A flickering drew his attention and he realised he was by a campfire, and he wasn't alone. Other people were trapped here too, and they needed his help.

There is 1 Achievement related to Quentin:

Players can choose from a variety of Cosmetic options to customise Quentin:

Quentin is part of 1 DLC:

For more go to Quentin's Gallery