Philip Ojomo or "The Wraith" is one of 29 Killers 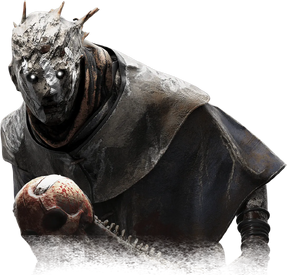 The Wraith is a stealth Killer, able to cloak and uncloak at the ringing of his Wailing Bell.

, give him extra abilities to track and locate Survivors, making him a very efficient Hunter.

He is all about tracking and hunting Survivors, making it easier to catch and kill them. 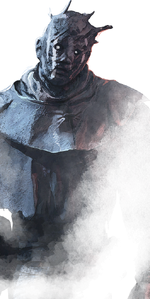 Additional Lore can be found in Tome 4 - Conviction: The Algebra of Infinite Night & Tome 9.5 - The Midnight Grove: The Bell from Hell.

Philip Ojomo came to this country without anything than hope for a new beginning. He was happy as he got offered a job at Autohaven Wreckers. A small scrap yard where bribed cops turned a blind eye for the somewhat shady business that took place.

Ojomo didn't care. He had seen criminal activity up close in his homeland and as long as he didn't get involved, he let things be. He just fixed cars and handled the crusher. Something he did really well. A car went in and a small, metallic cube came out.

It was not until one gloomy day that he, just by accident, saw some blood coming from one of the un-crushed cars. As he opened the trunk he found a young man, gagged and with tied hands with panic filled eyes. Ojomo freed the man who managed to run ten feet before Ojomo's boss stopped him and slit his throat. As Ojomo demanded answers he got explained to him that he'd been nothing more than a simple executioner as more or less every car had a soul in them as this was a "service" the scrap yard provided to certain "clients".

Ojomo snapped and went ballistic. He threw his boss in the crusher and let it slowly compress, as the head stuck out, Ojomo grabbed it and pulled head and spine out of the body. Then he left and was never seen again.

Prestige The Wraith twice more to automatically add Tier II and Tier III respectively into the other Killers' inventories.

Azarov's Skull is the Primary Weapon of Wailing Bell.
The teeth of death lie on Azarov's skull and spine.

WAILING BELL:
Press and hold the Power button to cloak.
Press and hold it again to uncloak, granting a short Lunge forward for 1 second upon re-appearing.
The Wailing Bell can be heard up to 24 metres away, and the accompanying *Wooosh* noise up to 40 metres away.

Light Vulnerability:
Interacting with the Spirit World causes The Wraith to suffer from Lightburn, which leaves him vulnerable to bright lights:

There are 2 Achievements related to The Wraith:

Players can choose from a variety of Cosmetic options to customise The Wraith:

The Wraith is part of 3 DLCs:

For more go to the Wraith's Gallery