Nemesis T-Type or "The Nemesis" is one of 28 Killers

He was introduced as the Killer of CHAPTER 20: Resident Evil™, a Chapter DLC released on 15 June 2021. 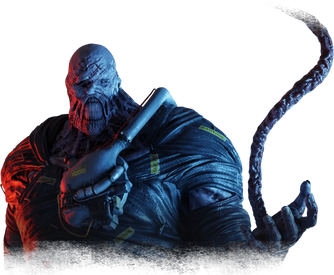 The Nemesis is an unrelenting Killer, capable of attacking at mid-range with his tentacle, while receiving support from Zombies roaming the area.

, allow him to quickly ambush Survivors, while sowing confusion and fear when injuring and hooking them. 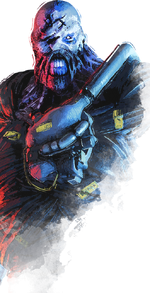 The Nemesis is a Model T-103 Tyrant, a superhuman bio-organic weapon mass-produced by Umbrella Corporation.
Unlike previous prototypes, it possessed near-human intelligence and could follow orders.
It was flown into Raccoon City alongside other Tyrants and ordered to eliminate any remaining members of S.T.A.R.S., including Jill Valentine.

The Nemesis, like all T-103 Tyrants, was infected with the T-Virus

during its creation.
However, due the T-Virus degrading the host's brain and causing a decline in intelligence to the degree of making it impossible for the host to follow complex orders, T-103s were additionally infected with the NE-α parasite which would take control of the host's body, bypassing the degrading brain and providing The Nemesis with near-human intelligence.

When The Nemesis uses his tentacle, it is not actually a tentacle, but the parasite within him, as the NE-α Parasite is a worm-like creature. 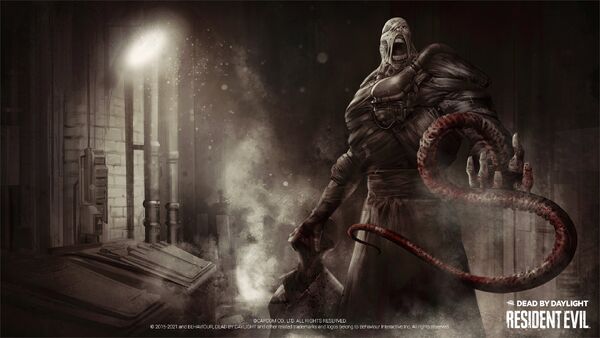 Designed by Umbrella Corporation, The Nemesis is a nearly unstoppable bio-organic weapon fixated on pursuing and eliminating its targets.
Part of the Tyrant T-103 series, this specimen has increased intelligence and awareness due to the NE-α Parasite implanted within it.
Its first mission unleashed it upon Racoon City, where it had a singular objective: exterminate S.T.A.R.S. members.
Rampaging through the city, The Nemesis faced off against Jill Valentine multiple times, and though she managed to escape, he was never far behind.
He nearly had his target, when a strange fog descended upon them, mixing with the smoke of a city in chaos.
The phenomenon meant nothing to him—the frigid cold and decreased oxygen never posing a threat.
All that mattered was soldiering on into The Fog, continuing the mission: find S.T.A.R.S., exterminate S.T.A.R.S., and kill anyone who gets in the way.

The Nemesis comes with 3 Perks

Progressing through The Nemesis' Bloodweb

The Raw Fists are the Primary Weapon of The Nemesis.
Powerful arms to overpower targets swiftly.

T-VIRUS
Your Power expands as your Mutation Rate grows.
Filling the Power gauge with Contamination points from attacking Survivors or Zombies with his Power increases The Nemesis' Mutation Rate:

SPECIAL ATTACK: TENTACLE STRIKE
Press and hold the Power button to charge an attack, then tap the Attack button to unleash a Tentacle Strike.

SPECIAL AFFLICTION: CONTAMINATION:
Survivors afflicted with Contamination are susceptible to damage from both The Nemesis' Tentacle Strike, as well as attacks from his Zombies. Contaminated Survivors will also occasionally cough.

Survivors can cure Contamination by using a Vaccine either on themselves or on other Survivors.
A limited number of Vaccines can be found in 4 Supply Cases

, that are placed throughout the Trial Grounds.

SPECIAL ENEMY: ZOMBIES
T-Virus causes 2 Zombies to spawn in and roam about the Trial Grounds.

The Zombies can attack Survivors when they come too close, but abide by the same conditions as a Tentacle Strike.

The Nemesis can wilfully destroy a Zombie to add +1 Contamination point to his Power gauge.
Destroying them using a Basic Attack yields no such reward.
This can be used to manually cause the Zombies to respawn in a different location in the Trial Grounds.

Survivors have limited options to interact with Zombies:

Pitch:
This refers to the maximum vertical viewing angle The Nemesis is allowed from the horizon (0 °) while charging and holding Tentacle Strike:

There are 2 Achievements related to The Nemesis:

Players can choose from a variety of Cosmetic options to customise The Nemesis:

The Nemesis is part of 1 DLC: