Nea Karlsson is one of 31 Survivors

She was introduced as the Survivor of CHAPTER 1: The Last Breath Chapter, a Chapter DLC released on 18 August 2016. 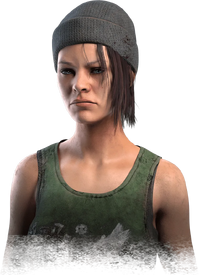 Nea Karlsson is an Urban Artist, able to easily escape and hide.

, make her well suited to completing Objectives and rapid evasion.

She is focused around movement - making her faster, more balanced, and better at evading the Killer.

Additional Lore can be found in Tome 5 - Unleashed: Rebel With a Cause.

Nea is of Swedish descent, a tagger and a bit of a troublemaker. She started rebelling when she was 16, she dyed her hair black and cut it in a way she liked it. In her early teens, her parents thought she lacked that thing that makes everyone else "normal". She may have gone too far when her friends, not thinking well, dared her to tag the old asylum. She was never seen again, and now tries her best to survive the Entity's dangers.

Nea grew up in the small town of Hjo in Sweden. She had a happy childhood even though her mom and dad worked hard. As the opportunity to move to the US became a reality she started acting out. Her parents didn’t really pick up on this as a reaction to their move. Nea was forced to leave her friends and life behind. Nea shied away from what her parents considered “normal”. Instead she took refuge in skate parks, and her tag “Mashtyx” was seen more or less all over her new hometown, and Nea made a sport out of tagging government buildings. Finally Nea’s parents became used to Nea disappearing for a few days on end. As she’s nimble and almost catlike, she’s able to evade deadly dangers. Years on skateboards has proven worthy training. And keeping her head down, avoiding the fuzz can be applied to all dangers. The only question is whether she has some interest in not giving up.

There is 1 Achievement related to Nea:

Players can choose from a variety of Cosmetic options to customise Nea:

For more go to Nea's Gallery