Nancy Wheeler was one of 31 Survivors

featured in Dead by Daylight

She was introduced as one of two Survivors of CHAPTER 13: Stranger Things, a Chapter DLC released on 17 September 2019, which remained available until the Chapter's departure from Dead by Daylight on 17 November 2021.

She originated from the 2016 Sci-Fi-Horror Web Television series Stranger Things.

She remains a playable Character for all Players, who had purchased Nancy prior to 17 November 2021.
She cannot be purchased anymore and was removed from the in-game Store.
The only way to still unlock Nancy retroactively is by using an existing code for CHAPTER 13: Stranger Things, which still exist in limited quantities, such as as a physical copy of the DLC or a DLC-bundle for Console. 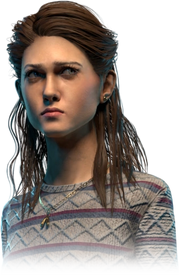 Nancy Wheeler is an aspiring journalist, able to make acute observations and gain insights that others may miss.

Her personal Perks, Better Together

, give her the information and courage she needs to tackle unexpected challenges.

Studious and rebellious, Nancy Wheeler is a stubborn investigator with an instinct for a good story. When her closest friend, Barb went missing, she did everything she could to unravel the truth and secure justice. A brilliant journalist, she chases stories and follows leads despite the inequality and chauvinism she encounters at the workplace. Pursuing a lead one evening, she fearlessly approaches the Hawkins National Laboratory before suddenly losing consciousness. A moment later she awakens in a strange misty realm with the sound of a familiar roar echoing through the air.

that were unique to her until the departure of the Chapter from Dead by Daylight:

With the Chapter's departure from Dead by Daylight, there are no Achievements related to Nancy anymore.

Players could choose from a variety of Cosmetic options to customise Nancy:

Before Nancy's departure, the following In-Game Store options were available:

Nancy was part of 1 DLC: