Mikaela Reid is one of 33 Survivors

She was introduced as the Survivor of CHAPTER 21.5: Hour of the Witch, a Half-Chapter DLC released on 19 October 2021. 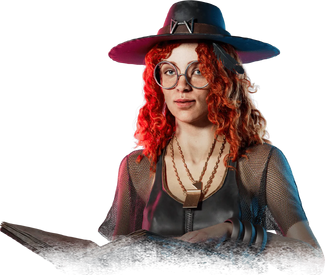 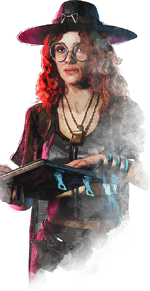 Mikaela Reid is a young mystic, able to alter the trial with supernatural abilities.

, allow her to oversee the area while creating areas of refuge. 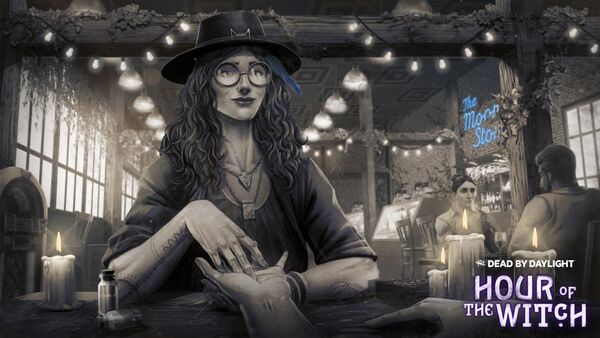 Additional Lore written by Mikaela herself can be found in Tome 9.5 - The Midnight Grove: Stories from the Witch Café.

Mikaela Reid was sixteen when her father passed away. She would always miss his sailing lessons at dawn, his colourful yet inedible tacos, and his warm, contagious laughter. She felt like she was paddling in a vast, storm-black ocean, each rolling wave submerging her. Drifting in painful darkness, she almost lost herself, but resiliently, with love and care, she made her way back to shore.

Well-surrounded and supported by her friends, Mikaela put the past behind her and looked at life in a new light. She was excited to try new things and discovered storytelling as an outlet. Her friends liked her stories of daunting danger and hard-earned survival. She read horror stories more and more, savouring the powerful, heart-pounding escapism it provided. Autumn become her favourite season and she threw a grand production for Halloween every year, hosting all her friends for a thrilling night of horror stories, scary games, and homemade treats.

Over the years, she also showed interest in witchcraft and practiced light blessings, plant-based spells, and palm-reading divination. She gardened sage, mugwort, and lavender to craft homemade products such as body butters, soaps and skin lotions. She aspired one day to live off the products she made for friends and family.

In the meantime, she worked as a barista at the Moonstone, an independent and eccentric coffee shop in the artsy part of town, Every Friday night, she hosted an open mic at the coffee shop, performing stories live in front of customers. Julian, her best friends and roommate, recorded some of her shows and posted them online. Also, unbeknown to her, he submitted one of her performances to the Endless Halloween Festival where renown storytellers performed on stage for Halloween.

It was a beautiful surprise when Mikaela received an email from the festival inviting her to perform at their grand final on Halloween. The winning prize was big enough for her to launch her line of products. Excited, she burnt a stick of herbs in each room to dissipate negative energies, then began to craft her tale of horror.

Mikaela stayed up all night filling her notebooks with abandoned beginnings. She had a story in mind, but unearthing it took patience and skill. The following night, the nightmares began. For a week, she would wake in the middle of the night gasping for air. Her dream was the same every night. She was dragged down a cold set of stairs and thrown into a dark basement. Then her lungs would be set ablaze by a sharp iron hook stabbing her in the chest. A dark figure would pull on the hook and hoist her from the ground, slowly, until the pain waked her. The more she finessed her Halloween tale, the darker her nightmares grew.

As days passed, exhaustion, anxiety, and stress took a toll on her. Often distracted, her coffees at the Moonstone were rushed, acrid, or going to the wrong customer. She no longer blessed the coffee beans in the morning nor looked for omens in the leftover coffee grains. Her energy was low, and her magic felt drained.

When she woke up screaming one night, she had had enough. She asked Julian to watch her while she slept and record anything unusual. Julian agreed and started recording while Mikaela lay on her bed.

Minutes later, her fingers began to twitch, then her toes. Her breath became laboured. Then Julian stared in shock as Mikaela slowly rose in the air, levitating over her bed. Panicked, he shook her shoulders to wake her, but stopped when she began to scream. He grabbed his phone to call an ambulance, but a powerful crash diverted his attention. He looked down the hallway and saw a large, spidery fang slam through the bathroom door.

Amidst the commotion, Mikaela woke. She saw the black spidery fang shredding the bathroom door and jumped out of bed. She slammed her bedroom door shut and shouted at Julian to help her barricade the door. Before he could react, however, the power went out. The room was submerged in sudden darkness.

A second later, the lights came back on and an eerie quietness followed. Mikaela and Julian ventured out the bedroom carefully. The bathroom door looked intact and there was no sign of anything abnormal. But Julian has recorded every sound.

A sleepless night followed. When she returned to the apartment after her shift, Julian was not there. Mikaela wanted to remove the recording of their ordeal, which he had posted online. Suspecting Julian might be at school, she left. The door clicked shut behind her, masking a stifled cry from the bathroom.

As she neared her car, she looked over her shoulder. Mikaela felt... watched. She whispered a protective spell and clutched her keys. Suddenly, a shadow pounced on the wall and she broke into a run. She reached her car and rushed inside, locking the doors. Breathing hard, she looked through the windows. No one was there. Perhaps it was her nerves playing tricks on her. She turned on the ignition and drove off.

The next day, Julian was still nowhere to be found. Mikaela had contacted everyone they knew. She looked for him all day and waited for him all night. Distraught and anxious, she missed her shift at the Moonstone. Halloween was tonight and so was the festival. Julian had entered the storytelling competition for her. He had supported her every time she doubted herself. Maybe he would be there. But between her nightmares and Julian's disappearance, she had been too worried to prepare a story for the contest. She looked at her notebook, filled with false starts. She could stay home, scared and helpless. Or she could finish what Julian had started. There was a reason why she loved to tell horror stories. They made her feel brave enough to face any challenge.

That evening when the host called Mikaela's name at the Endless Halloween Festival, she boldly stepped on stage, dressed in a costume: a black dress matched with a wide, witchy hat. She hoped to spot Julian in the crowd. But she could not find him and looking directly at the audience was a mistake. A sea of expectant faces was before her, eyes watching her every move. Her heart pounded in her chest as her hands began to shake.

She grabbed the warm microphone and cleared her throat. A thick silence greeted her, only interrupted by a distant cough. She reminded herself that tonight was All Hallows' Eve, when the veil thinned betwixt this realm and the one beyond. She had a story in her heart, a story that mattered. If she told it right, perhaps Julian would hear it.

Mikaela took a deep breath. The wet wind of Autumn whirled golden leaves around her. She inhaled the acrid smell of damp, foliage. She swallowed the bitter aftertaste of coffee still on her tongue. Distant eyes cawed from an old oak tree. She closed her eyes. The crimson darkness under her eyelids turned darker. Her heartbeat slowed. She exhaled deeply, her breath a puff of mist in the cold night air. Now she felt awakened, refreshed for the first time in weeks, and ready to tell the tale of a lifetime.

She spoke into the microphone in a deep, haunting voice. She narrated a tale of billowing winds on a cold Autumn night. Of a loyal friend disappearing before daylight. Of forgotten victims hiding in the wings of darkness. Of throbbing graves, sealed with terrible secrets. And of eternal night in the shadow of death.

Mikaela pointed at the night sky and said that no darkness was truly beyond light. Even on this moonless night, the sky shined with long-dead stars.

A thick black fog engulfed Mikaela, to the audience's amazement.

And no one saw Mikaela Reid again.

There is 1 Achievement related to Mikaela:

Players can choose from a variety of Cosmetic options to customise Mikaela:

Mikaela is part of 1 DLC: