Michael Myers or "The Shape" is one of 29 Killers

He was introduced as the Killer of CHAPTER 2: The HALLOWEEN® Chapter, a Chapter DLC released on 25 October 2016.

He originates from the 1978 Horror Movie franchise with the same name, Halloween. 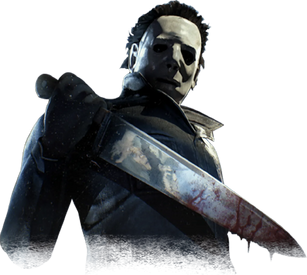 The Shape is a haunting Killer, intent on monitoring Survivors from a distance to feed his Power. The more he stalks, the stronger and faster he becomes.

His personal Perks, Save the Best for Last

, Play with Your Food

, select one Survivor to become his Obsession and will trigger deadly effects based on the Obsession Status.

His Perks are focused around Obsessions, just like Michael Myers is obsessed with killing, the Killer picks a Survivor, and tags them as his Obsession.

Some humans are simply bad seeds. Seeds infused with a distilled and pure form of evil.

Michael Myers is one of those seeds. He had no issues with causing the pain of others. Instead, it was exactly what he sought. But even life can be tough on those with minds filled with terror. The difference is just how one goes about to solve those problems. For Michael, he had to kill to find some inner peace. As he took his sister’s life, the police found a silent boy dressed as a clown at the scene.

When one stumbles upon a growing fire, one does not pour gasoline on it. But this was an action taken by officials that had no idea how it would shape this demon in the boy's body. Sending Michael to a mental institution was a feeble attempt to save the child. Unsuccessful therapy and nightly screams just made him even more introverted and deranged.

People hoped that Michael Myers would end up a parenthesis, soon to be forgotten and buried, a failure that soon were to rot away. But then...he escaped.

The Shape comes with 3 Perks

Prestige The Shape twice more to automatically add Tier II and Tier III respectively into the other Killers' inventories.

The Kitchen Knife is the Primary Weapon of The Shape.
An oversized blade with devastatingly sharp edges.

EVIL WITHIN:
Activating Evil Within allows The Shape to see his prey clearly and build up more evil power by stalking them:

SPECIAL ABILITY: Stalk
Press and hold the Power button to stalk all visible Survivors.
Stalking Survivors builds up your progress through Evil Within Tiers.

"I met him, fifteen years ago; I was told there was nothing left; no reason, no conscience, no understanding; and even the most rudimentary sense of life or death, of good or evil, right or wrong.
I met this six-year-old child, with this blank, pale, emotionless face, and the blackest eyes... the devil's eyes.
I spent eight years trying to reach him, and then another seven trying to keep him locked up, because I realised that what was living behind that boy's eyes was purely and simply... evil." — Dr Sam Loomis

* This audio cue used to warn Survivors actively being stalked by The Shape that his next Tier-up was imminent (Power gauge at ~85 %).
It was disabled after a couple of Patches as the Developers considered it too much information for the Survivors.

Observant Players may notice that The Shape changes his stance when progressing through his Evil Within Tiers or when he has specific Add-ons equipped.
However, contrary to the popular belief, these stance-changes are not tied to those, but rather directly to The Shape's momentary Movement speed, which happens to often correlate with his Tiers and Add-ons.

This behaviour allows Players using a controller to fake a different stance or even the use of specific Add-ons by purposefully walking slower than his maximum speed.

The Shape has 2 distinct Stances:

Add-ons for Evil Within

There are 3 Achievements related to The Shape:

Players can choose from a variety of Cosmetic options to customise The Shape:

The Shape is part of 1 DLC:

For more go to the Shape's Gallery