Lisa Sherwood or "The Hag" is one of 28 Killers

She was introduced as the Killer of CHAPTER 3: Of Flesh and Mud, a Chapter DLC released on 8 December 2016.

The Hag is a cursed Killer, able to place Phantasm Traps and then teleport to them upon activation, using her Power.

, apply crippling penalties to Survivors as long as the associated Totem remains uncleansed.

Her Perks revolve around Hex Totems

. They are focused on cursing the Survivors and sapping their abilities. The curse lasts until the Survivors manage to track the Hex Totem down and cleanse it.

Difficulty Rating: Very Hard
(These Killers require a high amount of practice and understanding, inexperienced Players are likely to find little success when using them) 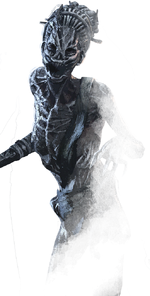 Additional Lore can be found in Tome IV - Conviction: Stroke of Luck.

Lisa Sherwood grew up in a quiet village, mainly isolated from the rest of civilisation. The people of the hamlet were kind and the elders kept old traditions alive, often keeping the peace by personally settling the ever-rare disputes. Lisa was particularly fond of the charms they taught her to draw for safety and good fortune. One night, as she was walking home through the woods, a terrible storm struck without warning. Howling winds whipped at her hair as she stumbled through the swamp, her rain-drenched dress plastered to her skin. In the slick, wet mud she lost her footing, careening backwards and striking her head against rock. Slipping in and out of consciousness, she strained to identify the dark shapes approaching her from between the trees. That's the last thing she could remember.

Her kidnappers kept her chained to the wall in a flooded cellar. Though dimly lit, she could see others whose large open wounds swarmed with flies. It took merely a day before they returned, carving chunks from the prisoners' bodies with rusted blades, consuming their very flesh down to the bone. Most she saw did not survive long once the cannibals targeted them but somehow, deep within, Lisa persisted. Starved, infected, and mutilated after several weeks of torture, her gaunt arms became loose in their shackles. She pulled hard, the metal tearing through skin and muscle until she was free. Her flesh oozed viscous yellow pus and bones were visible beneath gangrenous wounds. She could go no further. Delirious, she thought of home; she thought of the elders. With her dying breath, she etched the symbols they had taught her into the floor using what remained of her fingers. Almost in response, a dark hunger stirred inside her. It yearned for blood. In oath, she chose vengeance.

The village's search party eventually brought them to an old shack in a swamp. Inside, its previous inhabitants had been viciously dismembered and devoured by an unidentifiable animal. In the cellar, amid rotting corpses and disconnected flesh, the elders’ charms were scrawled in blood on the floor. Lisa’s body was not among the bodies and was never found. The village was never the same again.

The Hag comes with 3 Perks

Progressing through The Hag's Bloodweb

The Claw is the Primary Weapon of The Hag.
A horridly overgrown deformity, clawing its way through flesh and bone.

BLACKENED CATALYST:
Press the Power button to bend down and draw a muddy Phantasm Trap sign:

Survivors can prevent tripping a Phantasm Trap by either crouching within or interacting with Props within its Area of Effect.

Press the Active Ability button to teleport to a tripped Phantasm Trap located within a range of 40 metres, taking the place of the Mud Phantasm.

There are 3 Achievements related to The Hag:

Players can choose from a variety of Cosmetic options to customise The Hag:

The Hag has 1 alternate Character model available in the in-game Store:

For more go to the Hag's Gallery