Laurie Strode is one of 31 Survivors

She was introduced as the Survivor of CHAPTER 2: The HALLOWEEN® Chapter, a Chapter DLC released on 25 October 2016.

She originates from the 1978 Horror Movie Halloween. 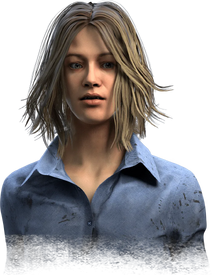 Laurie Strode is a determined Survivor, prepared to weather any challenge.

, grant her powerful survival abilities at the cost of leaving her exposed.

Her Perks are tied to the Killer's Obsession and surviving - no matter what.

You never know what really matters in life until you've realised it might end soon. Laurie is one of those who just wants a quiet life in the suburbs, hanging out with friends, family and maybe go on a date or two. Laurie is a typical teenager. You could pass her on the street and not think twice. She does her homework and is liked by her friends, teachers and family. A simple night of babysitting turns into something that will forever change the course of her young life. A knife swooshing through the air. Screams from afar. Noises that plays tricks with her mind. But not Laurie, she’s made of something stronger. Something that won't give up.

There is 1 Achievement related to Laurie:

Players can choose from a variety of Cosmetic options to customise Laurie:

Laurie is part of 1 DLC:

For more go to Laurie's Gallery