Kate Denson is one of 31 Survivors

She was introduced as the Survivor of CHAPTER 8: Curtain Call, a Chapter DLC released on 12 June 2018. 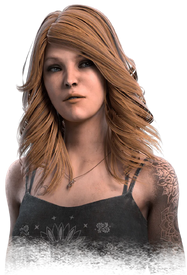 Kate Denson is a hopeful songbird, able to make the most of her surroundings.

Her personal Perks, Dance With Me

, grant her the foresight and feistiness to escape even the most dire situations. 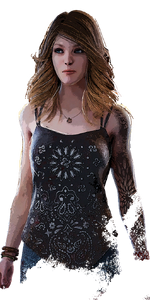 Additional Lore can be found in Tome 3 - Escalation: Back to Zero.

One of Kate Denson's earliest memories was standing in front of her family, singing a song that she'd learned that morning at school, and watching smiles spread across their faces. Seeing how something as simple as a song could make people so happy was the moment when she knew what she wanted to do with her life.

She practised, learned the guitar as soon as she was big enough to reach over it, and was performing in front of crowds by the time she was eight years old. Her mother did everything she could to fulfil Kate's dreams, taking her all over their home state of Pennsylvania, then across the South, and even to Nashville itself.

Kate won folk music competitions and talent shows whenever she participated, but for her to win others had to lose, and that wasn't in her nature. She only wanted an outlet, a way to touch people's lives. To make them forget the worries of the world and just enjoy themselves, if only for a while.

With age came a new-found freedom. She bought a battered old Chevy truck and was able to travel around by herself, meeting fans and making new friends wherever she stopped. Hers wasn't a story of rock excess though: just the road, her guitar and maybe a good bourbon to end the day.

From sun-baked festivals to dark and cosy bars, people flocked to her voice and her self-penned songs of friendship, family, love and home.

These sentiments weren't just lip-service: she made sure to return home as often as she could, to help out in her community and entertain the local children with her tales of the wider world. She saw it as a way of giving back, of supporting others in the same way she had been.

It was home where she found most of her inspiration as well. She had always loved to take long walks in the woods around her town, exploring off the beaten track, finding a quiet spot to play and write her songs. She had a favourite location she returned to time and time again, a natural hollow, encircled by trees, that looked almost as if it had been blasted out of the rocks thousands of years ago.

Here she felt a strong connection to nature, and to the Earth itself. She let her mind be enveloped by the forest and it rewarded her with constant inspiration.

She picked up her guitar and played, her fingers dancing across the fretboard. The music that she made this time was unlike her usual uplifting tunes, being much more melancholy, even dark. Still, something compelled her to continue, to finish the song.

Around her, the leaves vibrated in unison with the guitar strings and the boughs of the trees lengthened, coalescing into a living form. Spider-like legs descended from the canopy above, grasping for her. Regaining her senses, she grabbed a rock and tried to beat them back, but their skin was hard as iron and the rock simply bounced off and skittered away.

The legs coiled like tendrils around her limbs and lifted her towards the darkness overhead. Fog rolled across the clearing, obscuring both Kate and the creature of nightmares that drew her up towards itself.

When the fog cleared, there was no sign of any struggle, or of life. Just an acoustic guitar, the scratch plate engraved with flowers; as well as the initials KD, inlaid in mother of pearl.

There is 1 Achievement related to Kate:

Players can choose from a variety of Cosmetic options to customise Kate:

For more, go to Kate's Gallery.