Jonah Vasquez is one of 33 Survivors

He was introduced as the Survivor of CHAPTER 22: Portrait of a Murder, a Chapter DLC released on 30 November 2021. 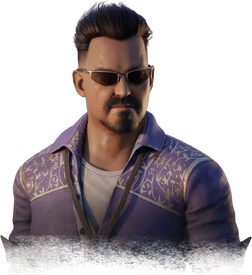 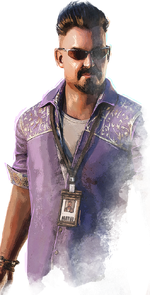 Jonah Vasquez is a mathematical mastermind, able to use logic to help his team. 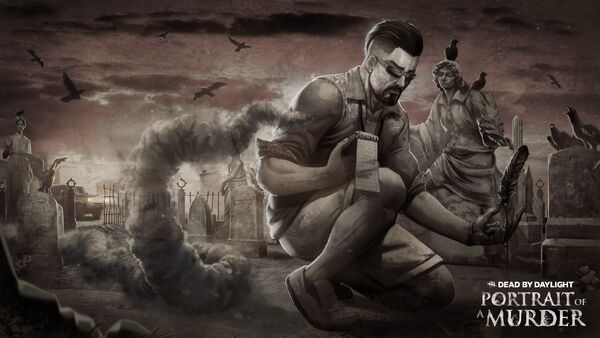 Additional Lore can be found in Tome 12 - Discordance: Legacy of Deceit.

Jonah Vasquez saw the truth behind the veil. His gifted mind understood numbers in a way few could. Sunsets, architecture, a blade of grass — he saw more within them than eyes could gleam. He understood the language that explained them — mathematics — complex equations that continually played out around the universe to determine why and how we exist. Structures. Patterns. A law unbroken: physics.

His gift would have been overlooked had his family's history of poverty continued for another generation. But some patterns are meant to deviate from their common course, and Jonah's father strived to better his family with every muscle he had. What started as a job picking fruit near Fresno, California, eventually led to him owning a small mangrove. It wasn't much, but it was enough to provide Jonah a stable childhood and education.

Though placed in advanced classes, there were few signs of Jonah's brilliance to his peers. He was a normal boy with a few close friends, a passion for baseball, and an interest in ancient civilisations. However, when he was alone, his mind turned to numbers — and these, to Jonah, were the most fascinating of marvels. He delved into Fibonacci and Recaman's sequences and was soon poring over complex equations from history's leading mathematicians.

It was a puzzle. Perhaps a gift from his math teacher or a relative who knew of his penchant for solving brainteasers. But somehow this was different. While he immediately recognised the GPS coordinates, quickly discovering they led to a location in Chile, the other numbers meant nothing to him. Every attempt he made led to failure.

Over time, he abandoned the puzzle, convinced it was flawed. He went on to university and, upon graduation, was hired as a codebreaker by the CIA. On his first day, written in his employee handbook, were the numbers from years ago: 8, 25, 19, 44, 1; -20.37, -69.85; 13, 2, 26, 11, 1. A tension in the back of his neck materialised, a feeling that he was being toyed with. He returned to the puzzle, only to discover that his years of experience would reveal no new information. He couldn't dwell on it — he had a job to do.

He was put to work deciphering messages from signal stations around Europe. Archived footage found that for twenty-three years dozens had been operating in an unknown capacity. Simple blinks of light hid complex codes that revealed disjointed information. It wasn't much to go on, but he discovered the messages seemed to involve powerful and wealthy individuals from around the globe.

The project was abruptly shut down. All agents involved were transferred to other assignments. Jonah was moved to a covert task force in the newly formed democracy of Kwantana, where he intercepted and decoded messages from bands of rebels. His work enabled the U.S. to target numerous rebel locations. Then the bombs dropped.

It was discovered too late that the messages were decoys. Civilian casualties were staggering, the true numbers covered up by officials. Jonah blamed himself. He saw first-hand the damage done and the families torn apart. He took a leave of absence but remained in Kwantana, surveying the damage. He had to do something. He cashed in his favours with one of the CIA's digital security experts and infiltrated the rebellion's computer network. From there, he took stock of the numbers, and made changes he thought no one would notice. Small amounts of money were siphoned from the rebels to those who lost their homes and loved ones.

It seemed like a smooth play, undetectable and bloodless — until the day the gunshots rang through his suite. Jonah hit the floor as glass shattered and holes punched through his walls. Grabbing his laptop, he broke his kitchen window and leapt to the neighbouring building's roof. Before he could even rub his throbbing ankles, the small house exploded into flames. He ran, not looking back. He climbed down to the alley, made his way to the slums, and concealed himself among rickety shanties of cardboard and rotting wood. A week later, he arrived at an American embassy, exhausted, dust-ridden, and defeated.

Before he could take a breath, he received a call from his chief officer at the CIA: "Was it worth it? You over this crusade of yours?". He felt powerless. And so, he returned his focus to what was simple, what was black and white: numbers.

His chief officer gave him a new assignment, one classified to all but a few. His research on the signal stations had reached someone high up, and the project was re-opened under a veil of secrecy. Jonah dedicated his time to deciphering the codes, partly out of fascination and partly to forget the guilt that resided within him. What started with signal stations led him to something even more baffling: horror podcasts.

In the stories of campfire thrillers and slasher tales from around the world were carefully concealed codes. Sometimes numbers. Sometimes words. Each time, as if being a secret password or handshake, he found the following message: Sacrifice is rebirth. Hidden in the code was information on a network of powerful people, all working towards what, he didn't know. There was chatter of summonings and rebirths, sacrifices and hunts. Jonah assumed much of it was red herrings attempting to mislead. Up late that night, he analysed another code — this time concealed in a story of vampires. What he deciphered sent a chill through his spine. 8, 25, 19, 44, 1; -20.37, -69.85; 13, 2, 26, 11, 1

The numbers had returned. They haunted him. He saw them when he closed his eyes. They clung to his sleepless mind, begging for attention. He checked the coordinates as he had years ago — it was nothing but a Chilean graveyard. He logged into the CIA database and searched the history of the location. Only one hit came up: a cold case where bodies were found in the area, the corpses eaten by hundreds of crows.

Jonah couldn't let the mystery go on any longer. The numbers had followed him all his life and he was ready to follow them. Knowing his chief officer wouldn't approve, he booked a ticket to Chile without anyone's knowledge. It was time to see what was so special about the coordinates. Less than 24 hours later he arrived at –20.36, -69.85. He found himself under the sweltering sun, standing in the graveyard of a ghost town.

There was nothing but dust and bones. Jonah spit into the dirt and puzzled over the numbers once more. He slumped next to an old grave, under the eyes of a watchful crow. He missed home, he missed the mangrove, he missed a time before the complexities of the universe crashed down on him. He looked out at the old derelict buildings on one side and the sweeping desert on the other. There were similarities to Fresno — the dry heat, the sunset that cast an orange glow on the dusty ground. But it wasn't home. Not to him. He looked at it from the eyes of a man who didn't belong in this place.

And then Jonah understood.

He was analysing the code from his own experiences, his own view of the world. There was so much he overlooked. With feverish devotion, he considered what the numbers could signify for other cultures: ancient Egyptian measurements, Persian currencies, and... antiquated calendars. He finally understood.

He sifted through his knowledge of ancient civilisations before coming to the Tanyrian calendar. Plugging in the numbers as dates, he converted the first half of them over to the Gregorian calendar. He wasn't prepared for the number it would reveal: his birthday. The world spiralled around him. With sweaty palms, he calculated the remaining numbers. It gave him another date: today.

The code... it was about Jonah, at this location, at this moment. His hands shook. His heart pounded against his ribs. Was he part of a prophecy or had someone led him down this path? He didn't know. For once, numbers no longer made sense.

A heavy fatigue came over him and the world shifted in impossible ways. He knew the equations behind nature, he knew what he saw couldn't be. He witnessed his father's mangrove beyond the desert and felt overwhelming comfort. Crows cawed in the distance and the smell of citrus wafted on the breeze. He considered that he was once more a child, and the numbers nothing but a horrible dream. Trapped in nostalgic thoughts, he didn't notice the Dark Fog seeping from the grass, swirling its way towards him. Crows flew from the branches, screeching relentlessly, flying in a circle above. It was too late when he realised the scent on the breeze was no longer citrus.

There is 1 Achievement related to Jonah:

Players can choose from a variety of Cosmetic options to customise Jonah: