Ji-Woon Hak (Korean: 학지운) or "The Trickster" is one of 24 Killers

He was introduced as the Killer of CHAPTER XIX: All-Kill, a Chapter DLC released on 30 March of 2021.

The Trickster is a ranged Killer, able to quickly unleash a flurry of blades by using his power, Showstopper.

, allow him to quickly down would-be rescuers and block areas of the environment to his advantage. 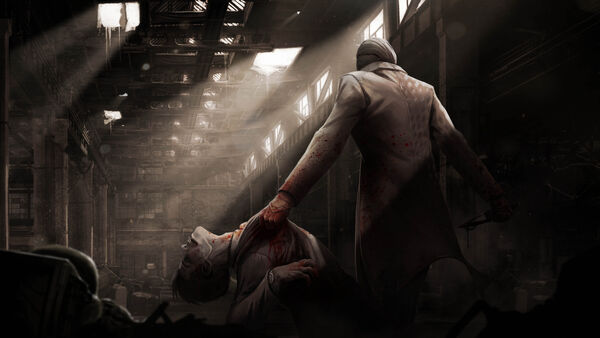 Ji-Woon Hak thrived under the attention of others, energized by every eye that watched him and every tongue that spoke his name. Amidst the prestige, he had only one desire: more. Even as a child he found ways to draw crowds. Working at his family's restaurant, he attracted business with spectacles he performed using throwing knives. Gullible tourists believed this was a traditional South Korean experience, gladly parting with their money to witness it. Ji-Woon's father spent the restaurant's earnings on dancing and vocal lessons for his son, pushing him to attain the fame he never could.

Ji-Woon did not disappoint. After years showcasing his abilities to nobodies at talent shows, he hit the track to stardom. Yun-Jin Lee, a producer at Mightee One Entertainment, recruited Ji-Woon into her training program. He transferred to a dormitory in Seoul where, for fourteen hours a day, he was crafted into a star, taught how to move and sing, how to carry himself with the right balance of confidence and modesty.

Draining as the process was, it worked. Yun-Jin selected Ji-Woon to join the band NO SPIN, bringing a raw energy to their tracks. Fame was almost immediate. Ji-Woon lived in a daze of interviews and adoration, and though the frenzied schedule exhausted his bandmates, he was invigorated. Each day was an affirmation that he was greater than the mediocrity society spewed out.

But over time, the champagne grew stale. When he looked at his fans, he saw their joy and envy split five ways, thinned out between each band member. The validation that had surged through him left a desperate yearning for more.

Ji-Woon kept up impressions, mimicking a charm long buried under loathing. He recorded the latest NO SPIN album with his bandmates, never missing a beat. After a lengthy lunch break, he returned to the studio to discover fate had granted him a gift. The scent of burning wires was unmistakable. He rushed to the control room, finding the door blocked by fallen speakers. On the other side, his bandmates pounded on the door, their cries accompanied by the crackling of flames.

Ji-Woon called to them, dashing to the speakers, grabbing one and—stopping. He froze. Each breath was a conscious, deliberate process requiring all his attention, the nearby cries hardly audible until, slowly, he backed away. And then he heard it. They were screaming his name as they burnt. Screaming for him to save them. Ji-Woon! Ji-Woon! Ji-Woon Hak! It was the most beautiful thing he'd ever heard. When the fire crew arrived, his tears were genuine.

Ji-Woon was celebrated as a tragic figure, a hero who did all he could in a futile attempt to save his friends. Yun-Jin paraded him through interviews until it was time to rebrand. He was reborn as The Trickster, a solo artist who produced his own songs, sporting a soft heart beneath a wild exterior. But, away from concert set-ups and television stages, something darker grew.

He targeted those who lived alone, coming to them in the night. The first was a college music student with a captivating voice. Ji-Woon woke him with a baseball bat to the skull, binding his arms and legs, gagging him with a rag duct taped into his mouth. He tortured him for hours, dissecting him alive. Yet there was something missing—a sound, a connection. He wanted to hear the victim's wonderous voice pleading as he cut his belly open, but all he received was muffled cries through a rag.

He learned and adjusted.

Victims had to be abducted, driven to an abandoned building where he could let their voices carry unrestrained emotion. He made music from them, prodding in the right places to evoke different types of shrieks and howls. Stabbing the quadratus lumborum elicited a long, guttural wail, while slashing the carotid artery created a sound like a cat being strangled. There was honesty in their suffering. Ji-Woon recorded each session, synthesizing and working them into his songs, hiding them behind layers of melodies.

He was elated with his work. He left hints for police, arranging a mink boa from a recent photoshoot around a victim's slashed throat. For his next killing, he removed the teeth from a man that a boxer in one of his music videos was without. During a particularly audacious plea for attention, he killed a fan he had met during a VIP meet-up, replacing her eyes with his diamond cufflinks and writing I HAVE SEEN GOD in blood across her chest. Each scene was a dazzling spectacle.

Between music and murder, Ji-Woon's work was discussed globally. However, as violence became his preferred art style, his music career took a hit. Revenue was down and Mightee One executives pointed their fingers at him. Yun-Jin, with professional fury, came to his defence, but she was outnumbered. It was decided that Ji-Woon could no longer self-produce his songs.

The decision was devastating. His tracks fused genuine humanity into music, yet executives rejected anything that wasn't generic and expected. And so be it. If they couldn't understand his art, he would incorporate them into it until they did.

He had three months until he was to perform a private show for Mightee One's board members; three months to plan his magnum opus. He transferred obscene amounts of money to a veterinarian in exchange for cannisters of nitrous oxide, then bribed the stage technician of Mightee One's private theatre for access to the room. His celebrity granted him a benefit of the doubt no regular person could conceive. When the show was ready, gas seeped into the room as executives and stagehands awaited Ji-Woon, conveniently running behind schedule.

When he arrived, half-conscious bodies were splayed in their seats and crawling across the floor. He worked quickly, binding everyone, pausing only when he came to Yun-Jin—the woman who had plucked him from a mudhole and set him on the path he deserved. She would be rewarded, granted special access to the coming display of wonder. Even under sedation, she fought, a raging storm within her, far stronger than the others. He propped her up as the lone audience member, prying her eyes open. The others, snivelling and sobbing, were brought on stage to perform their final act. With a contemptable sneer, he slapped makeup onto their faces and shone stage lights upon them. They became his instruments.

To the sound of self-produced melodies, he tortured them, gracefully dashing from one body to another, conducting an operatic crescendo from their wailings. They shouted, whimpered, screamed, cried for their loved ones, cried for their mothers. It was a magnificent outpouring of emotion, of what it meant to be human, and they did it with eyes fixed on Ji-Woon.

Viscera drained from the stage until, with the toss of his throwing knife, the final human instrument fell silent and the music stopped. Covered in sweat and blood, an exhausted Ji-Woon looked to Yun-Jin and bowed. Curtain call. He had attained perfection. With blade in hand, he made his way to Yun-Jin, prepared to tie up loose ends before the credits rolled. But as he reached her—

From where, he didn’t know, but it billowed around them, damp, cool... comfortable. He saw the grand stage: hospitals and temples, forests and slaughterhouses—an eternal plane adorned with rusted hooks, sustained by the million eyes that would watch him, run from him, experience him. All he had to do was accept, become an implement of The Fog and, most importantly, make them scream.

Once obtained, other Killers will be able to find The Trickster's Perks in their respective Bloodwebs from that point onwards.

A customised aluminium bat with a sharp edge and an iconic grip.

SHOWSTOPPER:
Start the Trial with 60 Blades.
Press and hold the Power button to wind up and enter the Throw State.

Laceration Meter:
A Survivor's Laceration Meter increases each time they are hit by a Blade.
Once the meter is filled (8 Blade Hits), they lose a Health State

There are currently 2 Achievements related to The Trickster.

Players may customise their Character by choosing one outfit style from each category. Blood-stained attire is obtained after The Trickster reaches Level 50 and prestiges.

The Killer is currently part of 1 DLC package: