Jane Romero is one of 31 Survivors

She was introduced as the Survivor of CHAPTER 11: Demise of the Faithful, a Chapter DLC released on 19 March 2019. 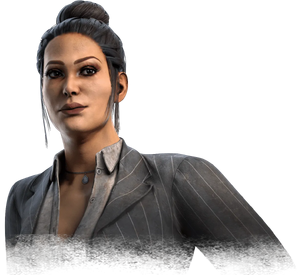 Jane Romero is an influential celebrity, going against the grain to tackle challenges head on.

, give her a flexible set of skills that allow her to help others, as well as herself, to escape dangerous situations. 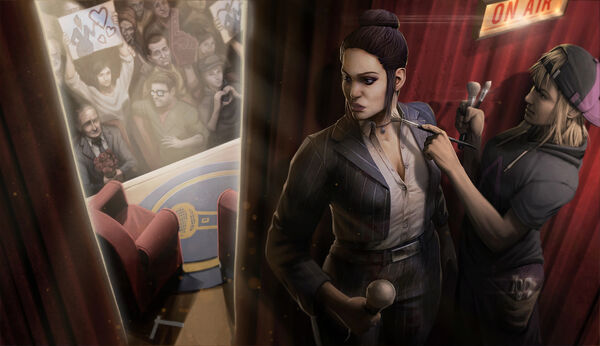 Additional Lore can be found in Tome 2 - Reckoning: All the World a Stage.

Jane Romero was the daughter of famous actress, Loretta Lawrence, of whom she had no memory. Her parents had separated when she was still a baby, mainly since her mother was often away filming. Jane was raised by her father, a struggling visual artist. She grew up torn between resenting her mother's absence from her life and admiring her presence on screen.

As a teenager, Jane secretly wished to emulate her mother's talent. She would direct and perform in plays, audition for TV commercials and help her father at his studio. During her senior year, she entered a national oratory contest and won first prize. Her performance attracted the attention of a radio station that contacted her for an interview. During the live show, her natural charm and repartee impressed the staff, who offered her a part-time job at the station.

After graduating college in Communication, she quit her job at the station to work for a trendy variety show. But her frank delivery and ad-libs were not appreciated by the show's executives, who fired her after five months. Desperate for another opportunity, Jane pitched a show at the radio station she used to work at, only to be turned down, her proposal being too risky.

Four months later, she received a phone call from a producer who had seen reruns of the show. He was looking for a co-host to spark up the failing show Quick Talk.

Live television meant long hours, a low salary, and no stability, but it also offered a platform to broadcast her views. She disputed the crude inflammatory tone of Quick Talk and pushed for a relate-able coverage of personal issues. Her honest delivery resonated with her audience and within weeks, the show's viewer-ship was steadily growing.

After two years, she launched a full-hour segment called The Jane Romero Show, which was broadcast nationally and covered tabooed topics, including her personal struggle with abandonment. Her show broke records and her initials J. R. became synonymous with products ranging from beauty creams to fashion accessories.

But Jane needed more; she wanted others to follow her in her footsteps. She published a memoir that covered her childhood with an absent mother. Her book was an instant best seller, but was reviewed harshly. Critics called it "a serving of sad anecdotes seasoned with bland, generic self-help tips." Jane took this criticism to heart, since despite her success, a voice in the back of her mind was starting to doubt her achievements. Her success also generated an increasingly demanding schedule and a growing pressure to entertain constantly. During a particularly tense week, she canned an episode and instead launched a two-hour-long special on divorce. Her stress peaked when she learnt that her mother had agreed to star in her show.

Jane put on a brave face and began the show. Most of it went without a hitch, but her mother walked on set, smiling warmly at the audience, Jane's stomach lurched unpleasantly. She was consumed by a violent envy that had been festering. Yet she carried on with a strained smile, until Loretta interrupted her, saying that they were not actually related. The interview went haywire after that.

After the show, Jane was driving to her father's house in New Jersey. She needed to talk things over with him; she had not been feeling like herself lately. She turned on a free-way along the coast to avoid major congestion and popped some painkillers to numb the throbbing pain in her temples, which had been nagging her all day. Then she started to relax and turned on the radio; classical music was playing. The drive was slow. Black ice covered the highway, which was packed with cars on their way back home. Night fell. A darkness began to blur the corners of her vision and turned the headlights into swirls of red. Jane blinked to sharpen their outlines, but each time she closed her eyes, her eyelids became heavier and heavier, until they remained shut for a moment too long.

The following morning, authorities were fishing out Jane's car from the water. Despite leading a meticulous search for weeks, they were unable to retrieve her body.

The airing and production of The Jane Romero Show was suspended until after her funeral, which both her father and mother attended.

As the public grieved for Jane, there was a surge of orders for J. R. products and all her episodes were re-released a month later, with an opening credit that wished her eternal peace.

There is 1 Achievement related to Jane:

Players can choose from a variety of Cosmetic options to customise Jane: