Jake Park is one of 31 Survivors

He was introduced as a member of the original Survivor Quartet that released with the Game on 14 June 2016.

Jake Park is a solitary Survivalist, able to hold his own in most situations.

His personal Perks, Iron Will

, allow him to more effectively move about the environment and survive while injured.

He is all about keeping calm as you face true terror. He is one with nature and used to surviving by any makeshift way possible. 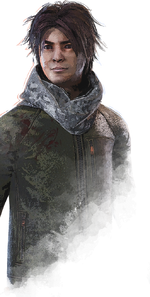 Additional Lore can be found in Tome VIII - Deliverance: Exile of the Kingdom.

Growing up the son of a wealthy CEO was always going to put pressure on Jake Park. When his brother graduated with honours from Yale, the pressure on Jake intensified. Jake just wasn't the academic type, but his father never really understood his refusal to embrace the expensive education he lavished upon him. Eventually, Jake rebelled by dropping out of school entirely. Now, Jake lives off the grid on the edge of the woods. It's been years since he spoke to his father but his mother checks in once in a while. It was she, who eventually called the police. The cops said he got lost in the woods and a search party looked for days, but gave up as bad weather rolled in. Despite passionate pleas from his mother, they never resumed the search and Jake went down in history as another casualty of the woods.

Jake's destiny was set even inside his mother's womb. Heir to wealth, noble manners and caretaker of the family reputation and legacy. During torture it's not pain that breaks a man, it's immense pressure. And Jake couldn't handle any more pressure. Instead he sought the opposite of fine dining and maids. He left the grid and ended up with a forest as closest neighbour. A self made outsider, Jake understands nature. He's not there to tame something - rather him becoming feral. Remove the brutal Killers that seek out blood to drain and Jake would feel just at home. No Wi-Fi. No Fortune-500 companies. No father or mother. Years away from modern life has given Jake a new feel for problems. Pain is just an obstacle that hinders you from getting fed. No matter what is hunting you, you need to stay one step ahead. Struggle, blend in, adapt. Just don’t make it easy for others to erase you from the Earth's surface.

There is 1 Achievement related to Jake:

Players can choose from a variety of Cosmetic options to customise Jake:

For more go to Jake's Gallery