Dead by Daylight Wiki
Register
Don't have an account?
Sign In
Advertisement
in: Pages with broken file links, Props
English

Hooks are one of 24 Props featured in Dead by Daylight

The purpose of Hooks is to allow the Killer

An exception to that are Hooks inside Landmarks. If they spawn there, they'll always be in the same location.

Before hooking a Survivor, Killers must pick up the Survivor and carry him to a hook. During this time, the Killer's speed is reduced to 3.68 m/s or 92 % for all Killers by default.

While being carried, the Survivor can wiggle, causing the Killer to randomly strafe side-to-side, and eventually wiggling free from their grasp after 15-16 seconds.

When in proximity to a Hook that has not been sabotaged or broken from an earlier sacrifice, the Killer carrying a Survivor is given the opportunity to hook that Survivor, placing them onto the Hook, this action takes 1.5 seconds.

If a Survivor is killed by the Entity on the Hook, the Killer will be unable to use the same Hook on another Survivor. The Basement Hooks are an exception to that.

Survivors are given the opportunity to unhook their dying teammate, unhooking takes 1 second to finish.

Hooked Survivors may attempt to unhook themselves from the hook, this action takes 1.5 seconds per attempt.

. Healing Progress of the Unhooked Survivor is reset after unhooking.

Some Score Events, Challenges, or Perk-activation conditions require that a Survivor is unhooked safely.
For an unhook to be considered as such, the just unhooked Survivor must not take any damage for the following 10 seconds.

equipped, have the opportunity to walk up to a Hook and sabotage it, breaking it temporarily in the process.
This action takes 3 seconds with either option, but will deplete 6 Charges from a Toolbox.

Killers are unable to hook a Survivor onto a sabotaged Hook, and will have to look elsewhere, potentially losing the Survivor on their shoulder if another Hook is outside of their remaining carrying range before the Survivor wiggles off. 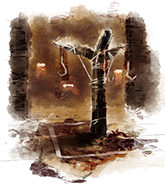 The Basement Hooks are impervious to any form of damage: they cannot be sabotaged by Survivors and also do not break when a hooked Survivor is sacrificed or a Survivor using Breakdown

is unhooked.
Originally, when sabotaged Hooks were destroyed permanently, they were the last resort for a Killer to still hook and sacrifice Survivors.

Scourge Hooks are no different from regular Hooks in appearance, but in effect.

, a few Hooks are selected at random to become Scourge Hooks.
The Killer will see those Hooks highlighted in a white Aura.
Hooking a Survivor onto a Scourge Hook will apply the effect of the associated Scourge Hook Perk.

The Lunar Hook are a special Hook model that is featured during the recurring Lunar Events Howling Grounds and Moonrise.

For every burnt Red Envelope

, a Lunar Hook would spawn on the Map.
Its Aura

would be displayed to the Killer in a blue colour.

During Howling Grounds, hooking a Survivor for the first time on such a Hook would grant the Killer one Burnt Coin

, 40 of which would unlock the The Hound customisation option for The Huntress.
During Moonrise, this was changed to grant points that could then incrementally be turned into a Gold Coin

, a temporary currency, of which up to 9 could be exchanged for special Event cosmetic pieces.

The Grill Hook was a special Hook model that was featured during the Scorching Summer BBQ Event.

For every burnt BBQ Invitation

in addition to 2 default ones, a Grill Hook would spawn on the Map.
Its Aura

would be displayed to the Killer in a blue colour.

The Cankerous Hook was a special Hook model that was featured during the past Halloween Events.

would be displayed to the Killer in an orange colour.

During The Hallowed Blight, hooking a Survivor for the first time on such a Hook would fill the Killer's Nectar Vial by one sixth with Putrid Nectar, with a filled Vial granting one Putrid Serum

, a temporary currency that could be used to buy the Event cosmetics from the In-Game Store.
During the Withering Blight Event, this was changed to just award Bonus Bloodpoints.

The Tangled Hook is a special Hook model that is featured during The Midnight Grove Halloween Event.

would be displayed to the Killer in an orange colour.

During The Midnight Grove, hooking a Survivor on a Tangled Hook' award Bonus Bloodpoints.

For Survivors, Hooks have three different stages. Stages 1 and 2 each have a duration of 45 seconds: