The Harvester, also known as the "Combine Harvester", is a Structure featured throughout the Coldwind Farm Realm.

The following Props may spawn around the Harvester.

Characters can access the top of the Harvester by walking up its head and the attached ramp.

At the top, there is a vault to the left and one to the right: 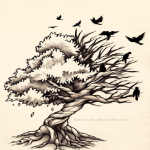