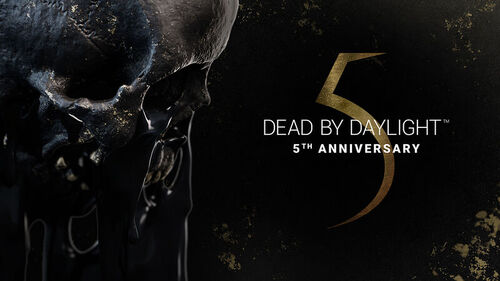 Fifth Year Anniversary is an Event in Dead by Daylight

that was scheduled to take place between 30 June and 15 July 2021, but received an extension to 22 July.

It kicked off the in-game celebrations for the Game's fifth Anniversary.

The Event sees the return of the Golden Crown Mini-Event from the Fourth Year Anniversary, as well as the Anniversary Items, including a new Toolbox in honours of the 2021 celebrations.

As a reward to the community for completing all the Challenges, a Blood Hunt was announced.

This would last from the 29th July - 2nd August 2021. (3rd August if the Stretch goal of 10 Million Crowns collected was reached.)

For the first fourteen days of the Anniversary, the Shrine of Secrets

was on a daily rotation and would feature Perks from almost every single Character in Dead by Daylight to date, including a discount of -500 Iridescent Shards per Shrine Perk.

As a thank-you for celebrating playing Dead by Daylight, over the first 7 days of the Anniversary, logging in will reward Players with a total of 9,000 Iridescent Shards, as well as a first-time log-in reward of 500,000 Bloodpoints:

5th Year Anniversary Crowns were only unlockable for original Characters up to CHAPTER 20.
Licensed Characters may collect them for bonus Bloodpoints, but would be unable to unlock them as a Cosmetic piece.

Each Trial would spawn a Crown Pillar

with a Crown hovering above it, emitting a sound close-by.
Interacting with the Crown would grant Players a special Score Event "Crowned" and dissolve it into the Character, giving them a special visual effect emanating from their torso for the remainder of the Trial.

The Crown Pillar would randomly despawn and respawn throughout the Map at an interval of between 90-120 seconds, giving each Player a chance to eventually get their own Crown as the Trial progresses.
There is only ever a single Crown Pillar at once on the Map.

Successfully finishing the Trial as Killer or escaping as Survivor with a Crown would unlock its corresponding Cosmetic piece.

During the Fifth Year Anniversary Stream, Developers also announced the return of Community Challenges from the 1 Year Anniversary, which will reward Players with exclusive Cosmetics, unique Outfits for The Wraith

The Community Challenge tracks the amount of collected Anniversary Crowns collectively across all Players with multiple shared goals.
Meeting each goal will unlock the aforementioned rewards through codes shared by the Developers: