Feng Min (Chinese: 凤敏) is one of 31 Survivors

She was introduced as the Survivor of CHAPTER 4: Spark of Madness, a Chapter DLC released on 11 May 2017. 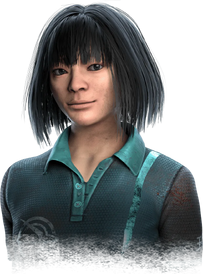 Feng Min is an objective-focused competitor who can quickly adapt her strategy to meet a vast range of challenging situations.

, help her with repairing Generators and locating the Killer.

She can silently work on Generators and thus can notice the Killer long before they notice her. She will be long gone before the Killer can do anything.

Feng Min was a young girl when she first picked up computer games, and she was instantly hooked. The brand new worlds enchanted her with colours, sounds and explosions – a chance to be somewhere else, or someone else. Her parents saw no wrong with a few minutes in front of the screen, but as minutes turned into hours and sometimes days, they finally decided to pull the plug and force Feng Min to put more efforts into her studies.

She felt smothered by her parents who refused to see the potential of a future in games, so she left home and spent her time in internet cafes and LAN parties where the old rules didn't apply. She spent hours playing, streaming, competing to rise to the top. Her parents became what she called "holiday parents" as she never saw them outside the holidays, and she became the black sheep of a one-child-family. In the gaming world, however, she finally found respect. Nicknamed the "Shining Lion," she was invited to join a prestigious e-sports team and to live in their dorms, where she found a sanctuary free of the misconceptions and prejudice she had felt from her parents and the non-gaming world.

Feng Min pushed her limits to prove she was the best. Sleep was less important to her than training. At the top of her game, she filled stadiums with fans who adored her. But it couldn't last forever; the pressure to be the best grew stronger and stronger. She pushed herself too far, slept too little, and her performance began to slip. She started to lose. At night, she would stay up, tormented by the thought of disappointing her parents… and her fans.

She spiralled out of control and fell into a pattern of self-destruction. She started wandering the streets and visiting bars, where no one knew of E-Sports, waking up in places she didn't remember. One day she woke up somewhere completely different… in a never-ending nightmare. Feng Min did not despair. As she learned more about the challenge she was up against, she realised this was what she had been training for her entire life. Now, she was going to win.

There is 1 Achievement related to Feng:

Players can choose from a variety of Cosmetic options to customise Feng:

For more go to Feng's Gallery