Felix Richter is one of 31 Survivors

He was introduced as the Survivor of CHAPTER 17: Descend Beyond, a Chapter DLC released on 8 September 2020. 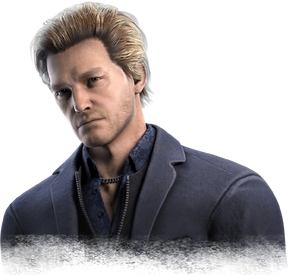 Felix Richter is a visionary architect, able to use his relentless determination to form a plan and help other Survivors.

, and Built to Last

, help him reveal Generators, rescue Survivors and get the most from his tools. 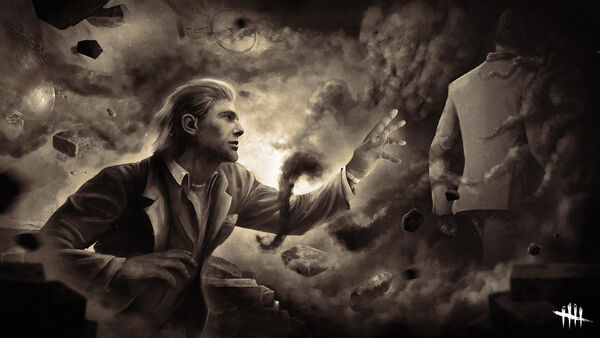 Felix Richter was born to Janos and Ursula Richter in Coburg, Germany, where the Richter family had deep connections and were among the most respected of its physicians. His parents, both members of an ancient society, were always out of the Richter manor at medical conferences or providing humanitarian aid around the world. Travelling exposed young Felix to new cultures, languages, and architecture unlike anything he had ever seen before. He wasn't sure when the architectural bug bit, but when it did, it bit hard, and he knew that despite his family's legacy, he would one day design buildings that would inspire the world. By 23, he was considered an architectural prodigy having won the Swiss Architect Medal and the German National Design Award. Yet despite his success, Felix couldn't shake the gnawing feeling that his success had more to do with luck and connections than talent and hard work.

Growing up, Felix was socially awkward and introverted, preferring his imagination to the company of others. He had few friends so when he wasn't travelling with his parents, Felix was in his father's library devouring rare books, studying history and architecture, soaking up anything and everything he could on architectural movements throughout the centuries. His father hoped young Felix would learn to be more outgoing and hired every possible specialist to help improve his social skills. When these efforts failed, he threw in the proverbial towel and figured his son would learn when he was ready. He then joined young Felix in the library, where he helped him build elaborate wooden models of buildings while telling him wild stories about his secret club and their ancient battle against a dark and ominous force. Stories, Felix was sure, his father had made up to make his 'Imperiatti' group sound cooler than it actually was.

Felix sometimes wondered if his design sensibilities came from his summer trips to Dyer Island, a private island that boasted some of the world's finest homes and designs. Every summer, Felix would accompany his parents to the island, where members of The Imperiatti would encourage their children to network and forge lifelong connections. Felix didn't mingle well with the other teenagers, but he did make four friends who like himself didn't quite fit the 'high-society' mould. They were often ridiculed by other teens and disparagingly called 'The Pariahs', a name they liked and gladly adopted. Instead of practising public speaking and engaging in endless debates, The Pariahs spent most of their time exploring the ruins and mysteries of the island until one of their adventures took a turn for the worse.

Exploring an abandoned internment camp, they descended into what seemed to be an underground laboratory where they uncovered old, leather journals with illustrations and notes of inhumane experiments conducted on prisoners of the First Opium War held by the British East India Company. As they pushed through a locked door, they found a chamber scattered with human skeletons and dusty vials filled with an unknown serum. Before they could examine the contents, the ground seemed to shake beneath their feet and a hissing sound filled their ears. A strange fog suddenly appeared and giant claws seemed to burst from the ground as dark imagination mingled with reality to terrorise them. Before they understood what was happening, Felix's father and several other parents came to their rescue, using strange tools and objects to protect them. Felix stared at the scene in shock and disbelief. He wasn't sure if he was dreaming or living one of his father's ridiculous, supernatural stories. By the time he realised it wasn't a dream, it was all over. The Pariahs were safe, but their parents had mysteriously disappeared without a trace.

After the shock of his father's disappearance, Felix searched for any theory that could help him understand the phenomena he had encountered on the island. He exchanged notes with The Pariahs and other people he had met online who had also lost loved ones in a similar way. The tragedy had fostered a strong relationship between The Pariahs and for years they worked together to unravel the mystery of what had happened to their parents. But nothing made sense, and every lead they pursued hit a dead end. With time their efforts dwindled, and the five friends slowly grew apart, each going their separate ways, hoping to forget the nameless darkness that had robbed them of their parents.

Over the years, Felix proved to be an exceptional architect, though he found little inspiration working for others. He realised his father was right. His lack of social skills was holding him back. With dedication and purpose, he improved his diction and decorum and learned how to network or 'play-act' as he liked to call it. He created the perfect façade to make himself more likeable and popular with potential clients. After working for several architectural firms, he established his firm with his colleague Lauren Golder. Both shared a similar vision and were philosophically opposed to formulaic modernist buildings, often experimenting with unusual materials, shapes and structures.

Felix continued to undermine traditional expectations in favour of the edgy and unconventional devices that set the architectural world abuzz. But even with all the accolades, he couldn't shake the feeling that he was a phony, like an actor who had learned a part instead of a true architect who had inspired the world with an impeccable design. During these moments of insecurity and self-doubt, he would distract himself with endless parties and drown his anxieties in alcohol, wishing his father was still around for some harsh advice and tempered wisdom.

Eventually, Felix's girlfriend announced that he was going to be a father. The news shook him to the core and, wanting to inspire his unborn child as much as his father inspired him, he quickly pulled his life together. What he needed was a project that would challenge him and cement his worth as an architect. As fate would have it, the perfect opportunity presented itself when old friends of his father commissioned his firm 'Richter and Golder' to build something new and unconventional on Dyer Island. The challenge excited and terrified Felix, who now drowned his anxieties with articles and books on parenting.

Within six months, the Dyer Restoration Project was underway, and as Felix surveyed the island, he suddenly heard a familiar voice calling out to him from beyond the shattered Victorian buildings and the crumbling ruins hiding dark stories long hidden and forgotten. Through a strange, gathering fog, he saw a form slowly take shape. His eyes widened, and his lips parted, but no words issued forth. Could it be? Was it possible? No... it couldn't be... it was... impossible... and yet...

With dawning realisation, Felix staggered back as he watched his father emerge from the fog. His legs felt weak, and his rising heartbeat thrashed in his ears. It was him. It was really him. His unborn child would know his grandfather, and he could finally show him how much he had accomplished since he disappeared. They stared at one another for a long moment. Then his father gave him a look of disappointment, turned his back on him, and proceeded to walk away. Over his pounding heart, Felix chased after him and was never seen again.

There is 1 Achievement related to Felix:

Players can choose from a variety of Cosmetic options to customise Felix:

Felix is part of 2 DLCs: