Elliot Spencer or "The Cenobite", also known as "Pinhead", is one of 28 Killers

He was introduced as the Killer of CHAPTER 21: Hellraiser™, a Chapter DLC released on 7 September 2021.

He originates from the 1987 Horror Movie franchise, Hellraiser.

, allow him to slow Generator Progression and continue to torment Survivors who have experienced his sweet suffering. 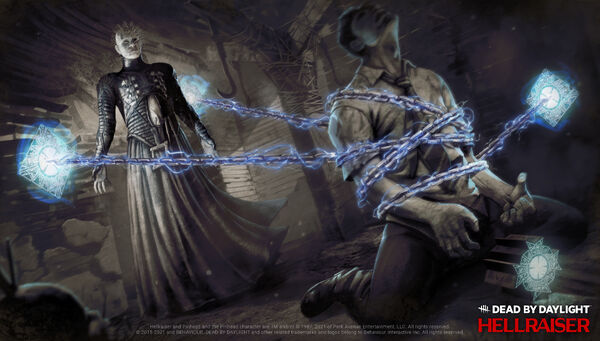 The Cenobite comes with 3 Perks

The Hook & Chain are the Primary Weapon of The Cenobite.
He wields them with thrill.

Press the Power button to create a gateway and release the button to open it.
Once opened, tap the Ability button to summon forth a possessed Chain under your control.

Directing a Possessed Chain into a Survivor will bind them with an uncontrolled Chain.

Chains:
A Survivor bound with a regular Chain is unable to sprint, suffers from the Incapacitated

.
If the Chain is not broken, a second and eventually a third Chain will appear and bind them as well, each applying a stack-able Movement Speed penalty to the Survivor.

Bound Survivors can perform the Break Free action to break free from the Chains.
Each Chain needs to be broken separately.

If the bound Survivor brings any environmental object between them and a Chain's Gateway, the Chain will break immediately.
However, this action causes a replacement Chain to spawn and attempt to rebind the Survivor.

If other Survivors, or The Cenobite himself, walk through a Chain, the Chain will also break immediately, without spawning a replacement Chain.

Upon starting the Trial, the Lament Configuration spawns in a random location in the Trial Grounds, and does so after each time it has been interacted with.

of the Lament Configuration, which is white when idle and yellow during an on-going Chain Hunt.

Any Survivor can pick-up the Lament Configuration and carry it with them, but not without experiencing some suffering.

The Cenobite can pick up the Lament Configuration himself, which will immediately start a Chain Hunt.
Additionally, all Survivors are instantly bound by Chains, causing them to scream and reveal their respective locations.

There are 2 Achievements related to The Cenobite:

Players can choose from a variety of Cosmetic options to customise The Cenobite:

The Cenobite has 1 alternate Character model available in the in-game Store:

The Cenobite is part of 1 DLC:

"I shall tear your soul apart!"

"What a waste of good suffering!"


"You shall not escape me!"


"Oh please! No tears, they are a waste of good suffering!"

"I have such sights to show you!"

"You shall not escape me!"