Detective David Tapp is one of 30 Survivors

He was introduced as the Survivor of CHAPTER VII: The SAW™ Chapter, a Chapter DLC released on 23 January 2018.

He originates from the 2004 Horror Movie franchise of the same name, SAW.

David Tapp is an obsessed Detective, able to locate and complete Objectives faster.

, make him objective-focused and able to rapidly recover.

His Perks are all about determination and not giving up. You are dead set on reaching your goal and survive no matter what. 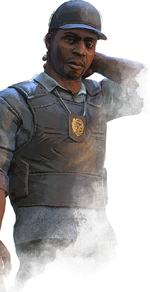 Additional Lore can be found in Tome X - SAW: Desecration of the Heart.

Detective David Tapp was one of the good guys. His determination to see Killers brought to justice and their victims avenged had led him through a long and respected career.

When he first saw the details of the Jigsaw case, it seemed like many others. More grisly and macabre, sure, but just another lunatic with a penchant for the over-dramatic, who would soon be behind bars.

A stroke of insight brought Tapp, and his partner Detective Stephen Sing, to an abandoned mannequin factory, where they discovered Jigsaw’s lair. They apprehended the man but he managed to escape before being unmasked, slashing Tapp's throat as he did so. Leaving his partner, Sing went in pursuit but fell victim to a booby trap. Tapp had failed to go by the book on this one occasion, entering the lair without a warrant, and it had resulted in a Detective's death. He was discharged from the force and left with a ruined throat and crippling guilt.

He channelled that guilt into an obsession: he would find the killer, stop the murders, vindicate himself, and avenge his friend and colleague. Following the evidence trail brought him to Dr Lawrence Gordon and he staked out the doctor’s apartment, sure that he would find some evidence of guilt.

Then he saw a stranger at Gordon's window and heard gunshots. Tapp confronted him and the man fled, with the pursuit leading to an industrial building.

Tapp's age caught up with him, a fight that he would easily have won in his younger days ended with Tapp taking a bullet to the chest. Slumping to the floor, he saw only failure. He had failed his partner and the other victims. Whoever the killer was, Tapp had been unable to stop him. More would die and it would be his fault.

He let the rage and guilt consume him and closed his eyes for the final time. Beneath him, the concrete floor softened. He dug his fingers into the ground, feeling dirt and leaves. Where his chest had been wet with blood, the shirt was now dry and the pain had gone. His eyes opened onto a darkened sky and the jagged, searching fingers of branches.

Screams echoed through the forest and a new determination filled him. His mind was clear for the first time in months. Victims needed to be avenged, killers thwarted. He didn’t know what this place was, but he was still a cop, and he always would be. He had a job to do.

There is 1 Achievement related to Tapp:

Players can choose from a variety of Cosmetic options to customise Tapp:

For more go to Tapp's Gallery