David King is one of 31 Survivors

He was introduced as the Survivor of CHAPTER 5: A Lullaby for the Dark, a Chapter DLC released on 27 July 2017. 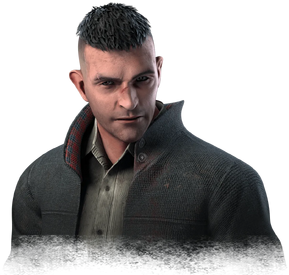 , reward an aggressive, confrontational play style, but leave him vulnerable.

His Perks are a result of his years playing rugby and stem from his strong physique and his need for Adrenaline. But being fast isn't everything, he's - sometimes - also a team player. But that side is seldom seen. 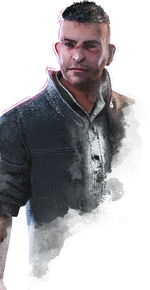 Additional Lore can be found in Tome 2 - Reckoning: Manchester Mash-Up & Tome 11 - Devotion: The Importance of Being King.

The single child of a wealthy family, David King seemed destined for greatness. While growing up in Manchester, he demonstrated serious potential in both sports and academics, and with his family connections, all doors were open to him. He could have succeeded at anything, if it weren't for his combative nature. David lived for the adrenaline rush of a good fight and would go out of his way to get into one.

His robustness and athletic abilities led him to rugby, where he could cut loose and really cause a ruckus. King excelled and gained a reputation as a promising, if somewhat reckless, rookie. His meteoric rise came to an abrupt end when he lost his temper and assaulted a referee, earning himself a lifetime ban from the league and cutting short what most people assumed was going to be a long, successful career. King was unconcerned; money was no issue, so he took it as an early retirement and focused on other fun things to do.

Free from the constraints of a career and enabled by the wealth of his family, David King spent most of his time at the pub, drinking, watching games, and getting into fights. Some might say he was wasting his life away. Not many people knew that he was an occasional "debt collector" or that he fought in clandestine bare-knuckle fight clubs.

When David King stopped showing up at the pub, the few friends he still had were not surprised. They figured he had finally picked a fight with someone stronger than he was. In a way, they were right.

There is 1 Achievement related to David:

Players can choose from a variety of Cosmetic options to customise David:

For more go to David's Gallery