Claudette Morel is one of 27 Survivors

She was introduced as a member of the original Survivor Quartet that released with the Game on 14 June 2016.

Claudette Morel is a studious Botanist, able to boost her team's survivability as well as her own.

, allow her to spot injured Survivors and heal both herself and her team more effectively.

She uses her time out of the fog to collect potent plants found around the Campfire to create tinctures that can stop bleeding.

Difficulty rating: Easy
(based on only using her Unique Perks) 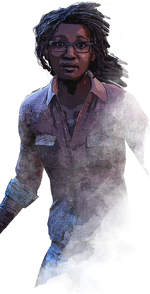 Additional Lore can be found in Tome I - Awakening: Claudette's 8th Birthday.

From the day that her parents gave Claudette her first science kit, she loved experiments. Her single-minded pursuit lead to an early scholarship at a great college. It was a huge decision to leave Montreal, but the chance was too good to pass up. Her introverted nature means that chat rooms and forums are now her best source of social interaction. Her new favourite activity is to answer botany questions for others under her new moniker of Science Girl. One evening, during a long bus ride back from the city, Claudette took a stroll that would change her life. It only took a minute for her to get completely disoriented in the thick woods. She never found her way back. Her forum only started to wonder where she was a week after she stopped posting.

Claudette is not the outgoing type. Her brilliance provided her with a social handicap and she has fled the real world for chat rooms and forums. Botany and studies fill her life and even though she yearns for something else - it won’t come via a modem. Being thrown into a real-life situation can feel awkward and forced. But as she is used to shutting out the world, she suddenly finds hope in this inexplicable darkness that is slowly devouring her. A plant. A tree. A bush. Simple greenery that might save a life. She hides within and amongst them. Her knowledge and skills flourish as gruesomeness roams free around her.

These are Perks which start off only appearing in Claudette's Bloodweb

. After achieving Level 30, Teachable versions of these perks can be found:

Once obtained, other Survivors will be able to find Claudette's Perks in their respective Bloodwebs from that point onwards.

There is currently 1 Achievement which is related to Claudette.

Players can customise their Character by choosing one outfit style from each category. Blood-stained attire is obtained after Claudette reaches Level 50 and prestiges.

Some items of clothing can only be worn if the appropriate DLC is owned.

Claudette is currently part of 5 DLCs:

For more go to Claudette's Gallery