Carmina Mora or "The Artist" is one of 28 Killers

She was introduced as the Killer of CHAPTER 22: Portrait of a Murder, a Chapter DLC released on 30 November 2021. 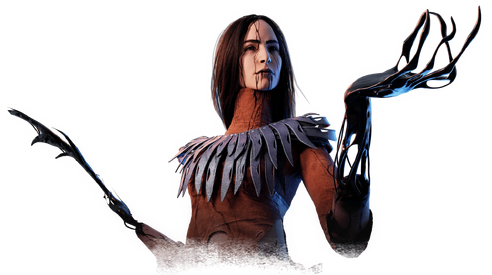 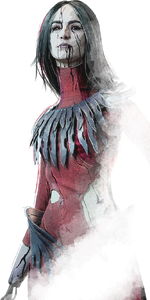 The Artist is a ranged-reconnaissance Killer, able to launch Birds of Torment across the Map to reveal and attack Survivors.

, allow her to interrupt Survivor objectives, torment hooked Survivors, and use destroyed Totems to her advantage.

(These Killers require the Player to be comfortable with the basics of the role, though they share common mechanics with easier ones) 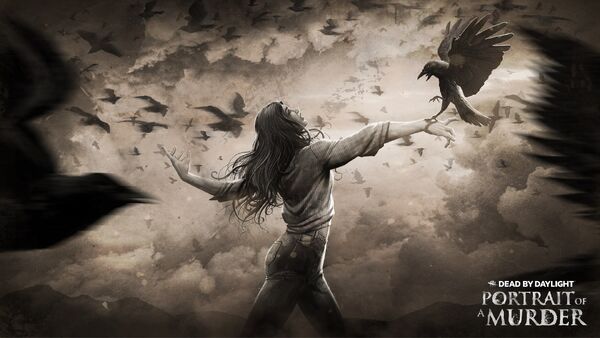 Carmina Mora was a gifted artist who carried the guilt of her young brother's death. Growing up a rugged coastal village in southern Chile, she sketched the sublime landscapes of Patagonia. Sitting outside, she painted dramatic fjords while feeding the crows nested in the tree next to the house.

She grew up carrying the guilt of her mother's sudden departure. Her father blamed Carmina for her mother's abandonment, which added to her grief. She became the caretaker of Matias, her little brother, despite still being a child herself.

A year later, Carmina was painting with Matias outside when the telephone rang. Her father remained in the yard, drinking his beer. Carmina rushed to the house to answer the phone and hung up a few seconds later. When she returned outside, Matias was nowhere to be seen. She asked her father, but he had paid no attention to Matias. She called her brother's name, looking for him everywhere. While searching, she saw a bright red coat floating on the narrow creek by the house — Matias' jacket. She jumped into the creek and found him floating on the surface with vacant eyes, unblinking. He had fallen and drowned.

Her scream tore the sky. Her father found Carmina sobbing on the creek's shore, clutching her brother's body in her arms, surrounded by a murder of crows. Her father snatched Matias's body away from her, and she cried until her voice broke.

The following morning, the world was cloaked in darkness. Her father did not say a word, because he did not have to. Carmina knew it was all her fault. Months passed, yet her loss was as fresh as morning dew. Crippled with self-loathing, she could no longer paint. Without Matias, life had no meaning.

Carmina walked to the railing of the bridge that stood over the turbulent river. Locals had nicknamed the spot DeathLeap. Several cars drove by Carmina, but none stopped. No one seemed to care. She climbed over the railing and her legs wobbled as she stood on the lip of the bridge. She looked down, watching the fierce river smash into a giant boulder. She closed her eyes.

Suddenly, a cacophony of caws filled the sky. Carmina opened her eyes and saw a black cloud of feathers flying towards her. The cloud split open and glossy black crows dove from the sky. One landed on her shoulder and stared intently into Carmina's eyes, as if peering into her soul. Her grip on the railing loosened and the crow cawed raucously. Carmina stared at the crow, confused.

Another crow landed on the railing, then another. Soon, a flock of crows were covering the railing of the bridge, staying close to her. She felt their heavy stare on her, calculative and enigmatic, as if they were assessing her. She looked down for a second and a thunder of caws interrupted her dark impulse. The crows seemed to care about her wellbeing. As she dangled over the edge with the wind blowing through her raven hair, Carmina felt akin to them. For the first time since Matias had died, Carmina did not feel alone.

She returned home, giving life another chance. The crows left, but Carmina suspected that if anything happened to her, they would return.

Inspired by her ordeal, Carmina picked up a brush. In the weeks that followed, she painted her experience, using black ink to depict the DeathLeap with a black cloud of feathers, the murder of crows that saved her life. The experience was transformative and launched her signature, black-ink surrealist art.

After several years, some colour pierced the darkness, and this shift of medium expanded her art form. She painted large-scale murals on busy street corners, designed grandiose costumes, and recited militant poetry. Carmina's art displayed local, intimate tragedies on a large scale, making them impossible to ignore. And everywhere she performed, crows followed.

Her performances grew bold and drew the attention of artists who found her style invigorating. She grew close to a group of painters who understood her iconoclastic vision. Her performances launched the Large-Scale Surrealist movement, which became a phenomenon.

Her renown grew enough to attract the commission of a multinational enterprise, The Vack Label. Carmina investigated the group, discovering that they gifted art pieces to select disreputable congressmen. Vack's commissioned artists seemed to disappear afterward.

Determined to expose the group's link to corrupt politics, Carmina accepted Vack's commission. The following week, Carmina painted a giant mural on a cemetery's columbarium, displaying the Vack Label logo as a surrealist grim reaper harvesting the fields of Chilean families. She wore a theatrical dress as she painted, on which she had stitched a poem about political revolution.

The piece sparked a radical debate about corruption. The controversy painted a target on Carmina's back. After receiving anonymous death threats, she took refuge in her father's house, bringing along her closest friends for safety.

That night, a gang of masked gunmen broke into the house. They swiftly subdued Carmina and her friends, threw them in a van, and drove off.

The following morning, a dry breeze blew sand on Carmina's face, awakening her. She was seated in a chair in the middle of the desert, with her legs tied and her hands handcuffed. Her friends were lying on the ground, tied up. A shadow fell over her face. Carmina looked up.

A man dressed in a long robe with his face hidden in a dark hood approached her. He pulled a silvery knife from his robe.

He grabbed her hands and recited a hymn in an unfamiliar language. Carmina held his gaze. He paused and brought down his blade with a sudden blow.

She cried in agony as her friends woke to a terrible sight; Carmina's severed hands falling in the sand.

The hooded man smiled in satisfaction. "How are you going to paint now?" Carmina cursed and screamed at him, wriggling against the bonds on her legs.

The man grabbed Carmina's chin. She spit in his face.

He grunted and pried her mouth open, pulling out her tongue. Carmina struggled in his hold. In a violent blow, he chopped off Carmina's tongue.

She howled in anguish. The man wiped his blade on his robe, leaving a trail of blood. "How are you going to recite poems now?"

Sorrow swelled in Carmina's chest, sharper than pain. Overwhelmed by uncontrollable rage, grief and loss overcame her senses. She had lost her little brother. And she had lost the only way to cope with such pain. Carmina screamed like on the day her brother died.

Raucous caws echoed through the wasteland. The sky was obscured by a cyclone of dark clouds. Black feathers fell on Carmina's bleeding arms. She looked up and saw a torrent of crows erupting from the clouds, diving on the hooded man.

As the ravenous crows pecked at his flesh mercilessly, Carmina smiled, watching her Surrealist art coming to life.

But her heart lurched with rage when she saw the crows move on to their next target, her friends on the ground. She screamed as waves of pain, guilt, and fright overwhelmed her. But it was in vain, the ravenous crows were uncontrollable.

Darkness fell over her eyes as her friends' agonising screams grew more acute. Death was coming and again, it was her fault.

A deep, Black Fog engulfed her.

Birds of Torment comes with 3 Perks

Progressing through The Artist's Bloodweb

The Sharp Palette Blade is the Primary Weapon of Birds of Torment
The absurd edges of reality forged a sharp blade out of the palette knife she once used to paint her murals.

Flight Path:
Dire Crows inflict damage to Survivors while still on their Flight Path, which is indicated to The Artist.

Once Dire Crows continue past their individual Flight Paths or fly through an obstacle within it, they turn into a Swarm, able to pass through any obstacles while flying on through the environment.

If a Swarm collides with a Survivor, it will start to swarm them with a Murder of Crows.
The Aura

If a Swarm collides with an already Swarmed Survivor, it will inflict damage.

Light Vulnerability:
Both Idle Dire Crows and Swarms are vulnerable to bright lights:

Add-ons for Birds of Torment[]

There are 2 Achievements related to The Artist:

Players can choose from a variety of Cosmetic options to customise The Artist:

The Artist is part of 1 DLC: