Caleb Quinn or "The Deathslinger" is one of 29 Killers

He was introduced as the Killer of CHAPTER 15: Chains of Hate, a Chapter DLC released on 10 March 2020. 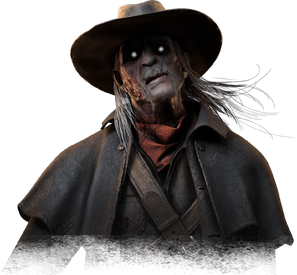 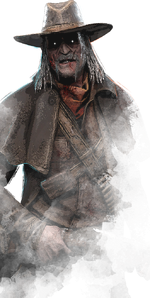 The Deathslinger is a vengeful Killer, able to spear Survivors from a distance and reel them in using his Power, The Redeemer.

allow him to locate and impede Survivor objectives, and punish Survivors for destroying Totems. 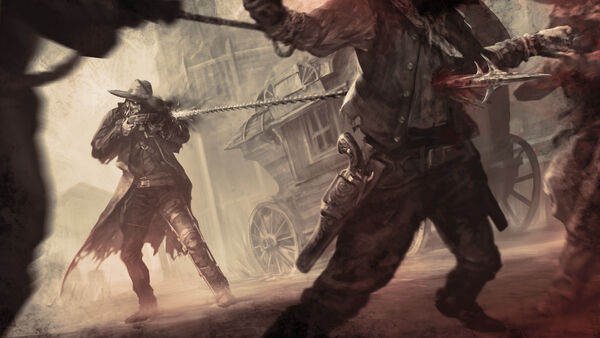 Born in the dust-ridden badlands of the American Midwest, Caleb Quinn was son to struggling Irish immigrants. On the edge of the frontier, sickness, famine, and death were common sights, and pioneers contended for whatever scraps they could claim while tycoons feasted. Caleb's father, once an engineer, had few options to ply his trade as businesses posted a common sign: No Irish Need Apply. His antiquated tools laid untouched for years until Caleb uncovered them. Noticing his son's interest in the trade, he gifted him his old wrench.

The devices Caleb made under his father's guidance had quaint applications, but when his father was away, they took a grim turn. He hid plans for a mask that would gouge barbed needles into a human's eyes and rip them from their sockets, complete with sketches of it fitted on boys who bullied him.

With age, Caleb's engineering abilities became marketable and employers put their discrimination aside. Henry Bayshore, the owner of United West Rail, hired him.

Caleb first invented a gun that shot railroad spikes into the ground. Next, he made a steam-powered tunnelling drill. But as Bayshore feigned indifference, the devices began turning up at other companies, the patents stolen from Caleb and sold.

A familiar sensation coursed through Caleb's blood, feeding the sharp pain in his heart. Rage overwhelming him, he burst into Bayshore's office and smashed his face into a bloody stew. As he was pulled away, he pushed his specialised gun to his boss' gut and squeezed the trigger. A railroad spike ploughed through skin and viscera, nailing Bayshore to his desk.

The only thing that saved Caleb from hanging was Bayshore's unlikely survival. For fifteen years, Caleb was confined to Hellshire Penitentiary, the nation's first private prison. In a fortress of illiterate convicts, he found an unlikely friend in the educated prison warden. He designed torture devices for him and in return received extra meals. After a time, the warden offered to commute his sentence. He spoke of something greater than monetary wealth — political capital — and that his connections could have Bayshore framed and rotting behind bars for life. He had only one request: make him rich. Fill the prison. Use ingenuity to bring outlaws in alive.

Caleb returned to his workshop, and with a few modifications emerged with something new — the speargun. The first trial occurred when a thief robbed a Chinese laundry. Seizing on the opportunity, Caleb unleashed his prototype. Metal joints screeched as the spike shot forward, gouging into the target's abdomen. But as the spear tugged, it caught the thief's intestines, and, with an ungodly sound, yanked them onto the dusty road. After several iterations, the disembowelments dwindled, but Caleb had already earned his new nickname: The Deathslinger.

Looking to protect his asset, the prison warden pulled strings and released Irish inmates to form Caleb's posse. The Hellshire Gang was born. For six years, they roamed the country collecting wanted outlaws for the prison, fulfilling their end of the bargain. After a bloody battle at Glenvale, Caleb caught notice of a newspaper headline: Henry Bayshore Purchases Hellshire Penitentiary. In the picture, a disfigured Bayshore proudly shook the warden's hand. Caleb's heart pounded with rage, blood swelling as if it would burst from his veins. He'd been sold out, a pawn in a rich man's game.

The Hellshire Gang pledged their loyalty to Caleb and called for the warden's head. In a thundering gallop, they smashed through the prison entrance, shrieking like bloodthirsty marauders. A guard raised his pistol, but hesitated. A spear punctured his chest. Caleb grabbed the man's head and slammed it against a prison cell until it spilled through the bars.

Reaching the warden's office, Caleb kicked the door and was met with a fortunate sight — it wasn't only the prison warden who cowered in a corner, but Henry Bayshore. Overpowered with rage, Caleb rushed to Bayshore, beating, bludgeoning, tearing at his flesh. The man's blood dripped from his face, crimson pooling at his feet. The Hellshire Gang swarmed the warden, snapping bones with each kick.

With the two men broken and begging for death, the posse dragged them to the commons, where they were left to the growing crowd of prisoners.

Soaked in blood and sweat, Caleb hobbled to his old cell, hardly paying notice to Bayshore's screams. He sat on the bed's edge as drops of blood ran from his fingertips. A thick, unnatural fog streamed through the barred window. He pulled out his old wrench, cracked and rusted, and ran a thumb along the metal, regarding it with faded eyes. He couldn't remember when it came into his possession. He didn't care to remember. At his feet, he saw a dusty path, and, at its end, silhouettes of all who had done him wrong: the boys who bullied him, the executives who took advantage of him, and, again... Henry Bayshore. Emerging from a fog were the tools to dispose of them — unforgiving steel hooks, brilliant and beautiful in their simplicity. Pain tore through his leg as he stood, but he endured, pushing onwards, walking the dusty path, leaving a trail of blood flowing behind him.

The Redeemer comes with 3 Perks

Prestige The Deathslinger twice more to automatically add Tier II and Tier III respectively into the other Killers' inventories.

The Death to Bayshore is the Primary Weapon of The Redeemer.
A sharp weapon with a strong bite.

THE REDEEMER:
Press and hold the Power button to aim down sights.
Press the Attack button to shoot a spear that can lodge itself in a Survivor, allowing them to be reeled in towards The Deathslinger against their will.

Reel:
While a Survivor is speared by The Redeemer, press and hold the Power button to reel them in towards you.
Survivors may struggle against the chain or use the environment to pressure the chain to break.
Doing so will result in briefly stunning The Deathslinger as well as putting the Survivor in the Injured State

and applying the Deep Wound

Using a Basic Attack while a Survivor is speared will break the chain without applying either a stun penalty to The Deathslinger or the Deep Wound Status Effect to the Survivor.

Successfully hitting a Survivor with a Basic Attack while they are speared and healthy will also apply the Deep Wound Status Effect.

Reload:
The Redeemer must be reloaded after every shot, before it may be fired again. Press and hold the Active Ability button to reload The Redeemer.

Add-ons for The Redeemer

There are 2 Achievements related to The Deathslinger:

Players can choose from a variety of Cosmetic options to customise The Deathslinger:

The Deathslinger is part of 2 DLCs: