CHAPTER 8: Curtain Call is the eighth Chapter DLC for Dead by Daylight

Curtain Call is a Chapter for Dead by Daylight.

People often speak of the tears of a clown, of the sadness that lies beneath the greasepaint smile. What if that wasn’t sadness, but a deep malevolence, born of a life spent in the pursuit of drink and gluttony? A mind that sees others only as vessels for torture, and reduces their bodies down to a single finger, a trophy to be added to a collection? For something like that to survive, it would have to wear a disguise, cloak itself in a brighter aspect and a broad smile, even if it were just painted on.

Kate Denson’s smile is genuine, friendly and warm. She sings of love and life, family and hope. She holds those values dear, and will fight anyone who tries to destroy them.

Carnivals are places of fun and laughter, of color and light, beacons of happiness in the dark. Make sure not to walk too far from the crowds and music, to be lured by the painted panels and inviting light of that lonely caravan, or you just might find one of your fingers added to the Clown’s collection.

The Clown has long used his nomadic lifestyle as a cover for his twisted pastimes. He distanced himself from a society that hated and feared him, living as a parasite, enticing those who strayed too near, anesthetizing and trapping them like butterflies. Beware, if you feel your senses dulling and your head getting light, RUN!

Throughout his years experimenting with anaesthetics and muscle relaxants, The Clown developed several effective concoctions and formulas. His favourite, The Afterpiece Tonic, he has used to great effect, intoxicating and capturing many unwilling victims.

Press and hold the Secondary Power button to replenish your bottles of The Afterpiece Tonic.

Kate Denson’s life was one of spreading joy and warmth to those around her. She made friends easily and friends soon became like family. Somehow she ended up here, where the only warmth comes from a bonfire and there is no joy to be found. Her attitude hasn’t changed though and she will do all she can to protect the new friends she makes.

Father Campbell’s Chapel was once a haven from the horrors of the rest of the asylum. Patients would come here for refuge, to seek guidance from the Father and to unburden their souls. Then, on that fateful night, the Asylum’s halls fell quiet and the Father met his end in the confessional that had helped so many.

Now it has been joined by a strange companion: a brightly colored caravan, pulled by a shadowy horse. Only a fool would let the bright colors seduce them into visiting…

Included with the chapter was the introduction of the In-Game Store. This started off the trend of limiting the steam DLC included cosmetics to just 1 cosmetic, rather than a full set like the DLC's prior. Also included was an In-Game Store collection of themed cosmetics for Dwight, Meg, Claudette, Jake and The Trapper. 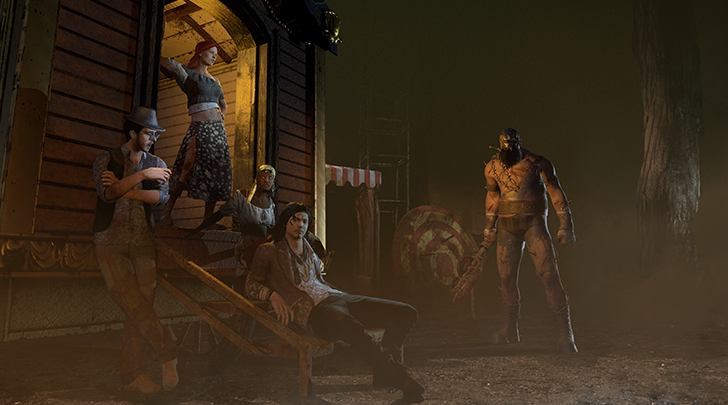