Dead by Daylight Wiki
Register
Don't have an account?
Sign In
Advertisement
in: Pages with broken file links, DLC

CHAPTER 24: Roots of Dread is the twenty-fourth Chapter DLC for Dead by Daylight

Roots of Dread description to be added. 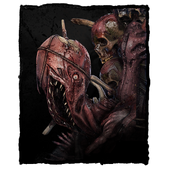 The Dredge background information (not Lore) to be added.

The Dredge's Power: Reign of Darkness[]

REIGN OF DARKNESS:
Start the Trial with 3 Tokens.
Press and hold the Power button to activate The Gloaming.

Once activated, The Dredge leaves a Remnant behind.
In this state, The Dredge is free to roam the Trial Grounds, albeit at a slower pace.

Aim at a Locker

and press the Ability button to teleport into it or press the Attack button to return to the Remnant.
The Remnant is disabled when teleporting to a Locker or when a Survivor touches it.
While in a Locker, aim at any other Locker and press the Ability button to teleport again.
Each teleportation consumes 1 Token.
Exiting the Locker or returning to the Remnant will activate The Gloaming's cool-down of 12 seconds, after which all Tokens are replenished.

SPECIAL INTERACTION: GRABBING SURVIVORS
If The Dredge teleports into a Locker that happens to have a Survivor hiding inside it or is in the process of entering it, The Dredge will automatically grab them and leave the Locker with the Survivor on its shoulder.

SPECIAL INTERACTION: LOCKING LOCKERS
At the start of the Trial, every Locker spawns with an open latch on its doors.
Survivors can walk up to any Locker and close that latch, locking it for The Dredge, but also for other Survivors.
This can be done once per Trial for every Locker.
The latch cannot be closed when another Survivor is hiding inside the Locker.

When The Dredge teleports into a locked Locker, it will slow it down while exiting it.
After breaking free, the lock breaks.
The Dredge can break the latch of locked Lockers from the outside by walking up to it and performing a Basic Attack.

Attempting to lock the Locker The Dredge is currently inside of will cause The Dredge to immediately grab the Survivor.
The same applies when attempting to enter that Locker or generally interacting with it in any way.

Once the Nightfall Meter is full, Nightfall begins automatically, forcing Survivors to navigate in near-total darkness.
Nightfall ends after 60 seconds.
Survivors destroying the Remnant will reduce that time.

During Nightfall, The Dredge benefits from the following effects: 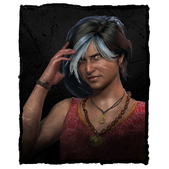 Haddie's background information (not Lore) to be added.