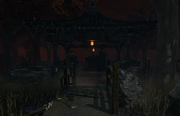 The Arbor is a Structure featured throughout the Yamaoka Estate Realm.

The following Props may spawn around the Arbor.

The Arbor is a Japanese-styled building with a traditional layout. There is a pile of debris in the middle of the structure.

There are three stairways leading to its surface, one of the four sides containing a vault.