Anna (Russian: Анна) or "The Huntress" is one of 28 Killers

She was introduced as the Killer of CHAPTER 5: A Lullaby for the Dark, a Chapter DLC released on 27 July 2017. 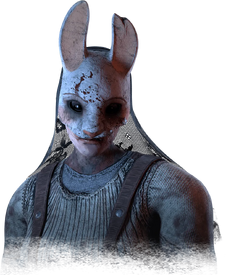 The Huntress is a ranged Killer, able to throw Hunting Hatchets at Survivors to injure them from a distance.

Her personal Perks, Beast of Prey

, allow her to apply pressure through better Map awareness and enhanced chasing abilities.

Her Perks revolve around the hunt of the prey, to track and find so that she can get close enough to make the kill. 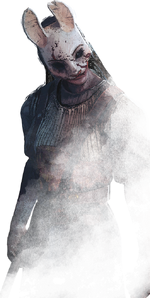 Additional Lore can be found in Tome 3 - Escalation: A Lovely War.

As soon as Anna was able to walk, her mother started teaching her how to survive a harsh, solitary life in the northern woods. Living in such an extremely remote and dangerous area required skill and resilience. When sunlight became too dim for productive activities, they would take refuge in their house, a sturdy old cabin constructed to resist the toughest winters. Close to the hearth’s warmth, Anna would rest in her mother's arms, surrounded by the few wooden toys and masks she had crafted for her. Drifting off to sleep with stories and lullabies, she dreamt happy dreams, ignorant of the events that would soon change everything.

Anna and her mother were stalking a great elk through the woods. They knew it was dangerous prey, but it had been a particularly difficult winter and they were almost out of food. The spectre of starvation frightened them more than any forest creature. Without warning, the elk reared, bellowed and charged at Anna. She was paralysed with fear as the whole world seemed to shake under the immense beast’s pounding hooves. The elk was close enough for Anna to see the murderous fury in its eyes when her mother threw herself in its path, axe in hand. A blood-curdling scream escaped from her lips as the elk impaled her upon its antlers and hoisted her into the air. With all her strength, she brought her axe down on its head again and again while it tried to shake her loose. With a sickening crack, the antlers snapped and Anna’s mother was free. The beast collapsed.

Anna was too small to move her mother’s broken body, so she sat with her in the clearing where she had fallen. To distract her from the dying elk’s cries, Anna’s mother held her and hummed her favourite lullaby. They stayed like that, the huntress and the elk getting quieter and colder, until Anna was alone in the silent forest. Eventually she stood up and started the long walk back home.

Still a child, she knew just enough about life in the frozen forest to survive. She followed her instincts and became one with the wild. She got older and stronger and practised her hunt. As she grew into a dangerous predator, her humanity became a half-remembered dream.

She widened her territory and lived off her hunts. She worked her way up through squirrels, hares, mink and foxes. Eventually she grew tired of them and hunted more dangerous animals like wolves and bears. When unsuspecting travellers came through her woods, she discovered her new favourite prey: humans. Unlucky souls who strayed into her territory were slaughtered like any other animal. She liked to collect their tools and colourful garments and especially toys when there were little ones. But she could never bring herself to kill the little girls.

Girls she would take back to her house, deep in the woods. They were precious, and looking at them woke up something deep in her heart. She craved the closeness of a loved one, a child of her own. Among the pillaged wooden toys, dolls and story books she couldn't read, the girls would be tied by the neck with a rough and chafing rope fastened firmly to the wall. She couldn't let them wander off, or they would surely die outside.

Every time, the girls would waste away and die of cold or starvation or sickness. Every time, it plunged Anna deeper into pain and sorrow and madness. She was compelled to try again, and started raiding the nearest villages to slaughter families and kidnap their daughters. She wore one of the animal masks her mother crafted for her so many years earlier to try to calm the frightened children. Villagers spread the legend of a half-beast lurking in Red Forest: The Huntress, who killed men and ate little girls.

War eventually came to the forest. German soldiers began to pass through, on the march to attack the collapsing Russian Empire. During these dark times, there were no more travellers. The villagers had abandoned their homes, and no more little ones to be found; only soldiers. Many of them were found with violent axe wounds. Whole groups disappeared mysteriously. Once the war was over, the rumours of The Huntress disappeared with it, engulfed by the Red Forest.

The Huntress comes with 3 Perks

Progressing through The Huntress' Bloodweb

The Broad Axe is the Primary Weapon of The Huntress.
A traditional Axe with a large and heavy head, suitable for squaring logs and planks.

Lullaby:
The Lullaby ranges from 0 to 45 metres and plays at all times, only temporarily interrupting whenever The Huntress goes for a Basic or a Special Attack.

There are 3 Achievements related to The Huntress:

Players can choose from a variety of Cosmetic options to customise The Huntress:

The Huntress has 2 alternate Character models available in the in-game Store:

The Huntress is part of 2 DLCs:

For more go to the Huntress' Gallery