Albert Wesker or "The Mastermind" is one of 29 Killers

He will be introduced as the Killer of CHAPTER 25: Resident Evil™: PROJECT W, a Chapter DLC to be likely released in September 2022. 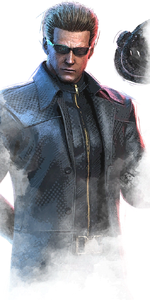 Albert Wesker is a brilliant and ruthless mastermind infused with the Power of Uroboros.

, allow him to vault faster, see other Survivors' Auras while carrying one, and cause Survivors to be permanently Broken when the Exit Gates are powered.

Albert Wesker was a high-ranking official in the Umbrella Corporation. While he made great strides with Umbrella, his ambition drove him to betray the corporation. Believing himself the best test subject, he exposed himself to the Prototype virus. Now with superhuman strength, Wesker faked his death and went underground with a new plan: expose the world to Uroboros, a biological weapon that would eliminate the weak and leave only the strong.

Wesker began to put his plan to action in Africa but was confronted by members of the Bioterrorism Security Assessment Alliance at a hangar stocked with missiles carrying Uroboros. Determined to be at the vanguard of evolution, he once again made himself a test subject. Exposing himself to Uroboros, he began to evolve in ways he could have never imagined. But as he felt his cells change, a strange black fog seeped into the hangar and filled his vision. When the fog finally dissipated, he found himself in another world surrounded by lesser beings that deserved to be put out of their misery.

The Mastermind comes with 3 Perks

Prestige The Mastermind twice more to automatically add Tier II and Tier III respectively into the other Killers' inventories.

The Combat Knife is the Primary Weapon of The Mastermind.
Weapon description.

VIRULENT BOUND
The Mastermind can barrel forwards, infecting Survivors with the Uroboros Virus or leaping over obstacles.

SPECIAL ATTACK: BOUND ATTACK
Press and hold the Power button to charge a Bound Attack.
While charging, The Mastermind moves slightly slower, as he prepares his strike.
When charged, press the Attack button to Bound.

while using Virulent Bound, he vaults over the obstacle.

SPECIAL AFFLICTION: UROBOROS INFECTION
The Uroboros Infection builds over time.
Upon reaching Critical Infection, the Survivor suffers from the Hindered

If The Mastermind grabs and slams a Critically Infected Survivor while using Virulent Bound, he will automatically begin to carry them.

When Infected, a Survivor can use the First Aid Spray on themselves or other Survivors to remove the Infection.

THIS INFORMATION HAS BEEN DATAMINED FROM THE CODE AND WAS NOT TESTED IN-GAME.
IT IS SUBJECT TO CHANGE AND MUST BE TAKEN WITH A GRAIN OF SALT UNTIL THE RELEASE OF 6.2.0 AND TESTING COULD BE DONE.

The value is applied as a multiplier to the Survivor's Movement speed.

There are 2 Achievements related to The Mastermind:

Players can choose from a variety of Cosmetic options to customise The Mastermind:

The Mastermind is part of 1 DLC: