Ace Visconti is one of 27 Survivors

He was introduced as the Survivor of CHAPTER III: Of Flesh and Mud, a Chapter DLC released on 8 December 2016.

Ace Visconti is a lucky Gambler, improving the odds of the entire team.

, and Ace in the Hole

, boost the Luck of all Survivors and help with Chest searches.

He is one lucky bastard or at the very least he believes he is. Therefore, he's always ready to make a gamble. Often, he's right.

Difficulty rating: Easy
(based on only using his Unique Perks) 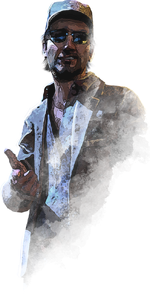 Additional Lore can be found in Tome IV - Conviction: Go For Broke.

Ace Visconti is one charming guy. With his sharp Italian looks, grey-streaked hair and silver tongue, he could pass for an ageing 50's movies star. His heart has always belonged to the cards. From his roots as a poor boy in Argentina, he gambled, scammed, seduced and smooth-talked his way to a life of luxury as a high roller in the land of opportunity. Despite money always having a way of slipping through his fingers, Ace always figured he could win more. He never fulfilled that ambition; eventually he racked up too many debts with the wrong kind of people. And when they finally came to collect, Ace was nowhere to be found. No one knew who tipped him off or where he fled to, but anyone who knew Ace Visconti can agree on one thing. He will survive: against all odds.

These are Perks that start off only appearing in Ace's Bloodweb

Once obtained, other Survivors will be able to find Ace's Perks in their respective Bloodwebs from that point onwards.

There is currently 1 Achievement which is related to Ace.

Players can customise their Character by choosing one outfit style from each category. Blood-stained attire is obtained after Ace reaches Level 50 and prestiges.

Some items of clothing can only be worn if the appropriate DLC is owned.

Ace is currently part of 3 DLCs:

For more go to Ace's Gallery