Élodie Rakoto is one of 33 Survivors

She was introduced as the Survivor of CHAPTER 18: A Binding of Kin, a Chapter DLC on 1 December 2020. 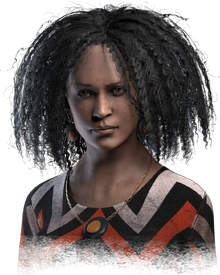 Élodie Rakoto is an occult investigator, able to use cunning tricks and stubborn resolve to keep herself alive.

, allow her to interact with objects in new ways, all while having a backup plan to escape Killers. 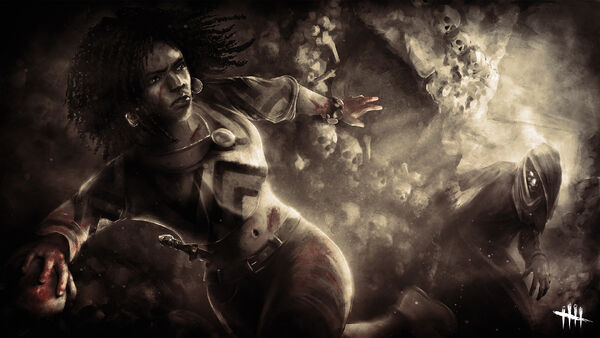 Born into a lush Parisian household, Élodie Rakoto grew up in a comfortable home miles away from the verdant island of Madagascar, her parents' birthplace. Her backpack was always heavy and usually contained no schoolwork. She carried the essentials: a few history books, some printed maps, and a compact shovel. Instead of wasting away with regurgitated facts from her classes, she explored the city to discover the stories behind each statue, neighbourhood, and street sign. She collected bits and pieces of Paris, making it her own.

When she was fourteen, her parents took her to Dyer Island for a 'business trip.' To her grand disappointment, the island was a private site for exclusive members of the Imperiatti. She was forced to attend pretentious and awkward social mixers daily. After a few weeks on the island, she met the Pariahs, like-minded teenagers who had no interest in being pawns for their parents' political chessboard. On dull, rainy nights she would convince them to sneak out and explore the island unsupervised.

One foggy evening, they stumbled upon an abandoned internment camp. Felix, one of the Pariahs, didn't want to go in, but Élodie insisted. Inside, they found a strange underground laboratory in ruins. The Pariahs grew excited, browsing through the strange apparatuses for trophies and mementos. But Élodie noticed something in the far-left corner of the wall: odd scratches in the shape of a circle. She ran her fingernails against the cool concrete — the marks were deep and narrow. A warm whisper suddenly sent her mind adrift —

— Deep, rumbling thunder. Black, glistening waves. An ashen sanded beach. Incomplete. She was compelled to touch the ice-cold sand and draw a circle with a line in the middle.

A sharp thunderclap and lightning whipped the sky. The ground shook as sleek, obsidian claws tore through the concrete floor, ripping the earth open. The building began to collapse and Élodie spotted her mother wielding a bizarre instrument while her father told her to run. Then —

For years, this nightmare woke her in the middle of the night, cold, sweating, shaking like a leaf. As a child she suffered from night terrors and often resisted going to bed. To soothe her mind, her grandma would light a tea candle and tell her stories until the wick extinguished in a hot pool of liquefied wax. The perfume of the warm vanilla-scented wax would lull Élodie to sleep as she envisioned stories of legendary heroes defeating fear and foes. Élodie had forgotten the stories, but she still remembered her longing for the verdant Malagasy rain forests and colossal mountains that her grandmother described. When Élodie felt cold and numb with grief, she would light a vanilla-scented candle and summon her childhood memories of this distant, idyllic place, raising her spirits to rise above her crippling depression.

Fourteen years later, Élodie still searched for the missing pieces of the puzzle. No rational explanation could explain her parents' disappearance, so she had been looking elsewhere. She researched any and all legends that mentioned a dark force that snatched people at night without a trace. From there, she translated old tales and built a tapestry of narratives from around the world that corroborated the uncanny way her parents had vanished on Dyer's island. She also gathered artefacts made by ancient civilisations who sought to destroy or resurrect the incomprehensible and indescribable Thing that took her parents. There were various names for it, differing from one language to the next: The Abyss, The Infinite, The Hole.

Her findings pushed her further into the dark field of occultism. The Pariahs were long gone. She'd alienated them with her theories. But she refused to give up on her parents.

Élodie had to set out into the cold, misty evening. She turned a corner, leaving Paris' 13th Arrondissement, an eccentric neighbourhood with a substantial library dating from the middle ages. She had pressing work to do for Hazra Shah, the Collector, an occult specialist who archived rare artefacts.

He'd recruited her after she'd salvaged a rare stolen Maori statue of spidery fangs like the claws she'd seen on Dyer's island. For the next five years, Élodie had been procuring occult relics for the Collector. In exchange, he provided large sums of money, equipment, and precise information about obscure manuscripts.

Just as the Collector requested, she had secured the annals of a witch trial convicting a mother birthing conjoined twins in the 17th century. According to legend, an occult incantation was engraved on a set of skulls, all of which the Collector possessed except one—the witch's skull. There were no traces of where the skull was now, but Élodie had found a newspaper article dating back to the same year, mentioning that most remains had been relocated to the catacombs to avoid a pandemic. Élodie was acting on a hunch. Breaking into the catacombs to retrieve a lost skull involved certain risks, but no more than the previous work she'd done for the Collector.

With a flashlight, she followed the ancient layout of the catacombs and spotted a collapsed wall. A few large stones blocked the way in. She grabbed her portable XRF-analyser and scanned the materials of the wall. Working for the Collector had its perks. The brick mortar had been poorly mixed, showing high traces of sand. The whole thing was brittle, and the ground was moist from the damp evening air. This was her way in.

The journey beneath was long and treacherous. The air was heavy and mouldy. She gasped when her key-chain flashlight hit an endless wall of bleached-white skulls.

Something cracked behind her. She spun around and collided headfirst with a baseball bat. Pain exploded in her skull and darkness filled her view.

When she came to, a man was carrying her over his shoulder, venturing deeper inside the catacombs. He was wearing a dark robe.

She'd managed to elude them until now. Ruthless and lethal, they went by many names. She'd figured out that they ultimately all worked for the same group, a ring of occult fanatics rumoured to perform human sacrifices for what they called The Old One. She had to get out of here fast.

Élodie spotted a loose skull on the wall, grabbed it and smashed it on her assaulter's head. Stunned, the man lost his balance and Élodie hit the ground running. As she turned a corner, she suddenly felt a sharp pain to her side.

She looked down and saw a large blade planted there. Shocked, she removed the knife and warm blood spurted out.

Her heartbeat rang in her ears as her vision blurred.

She fell to her knees. Summoning all her strength, she drew a circle on the ground with a shaking, blood-red finger and traced a line in the middle.

A ghostly cry erupted from the thick foliage.

Élodie looked up and the vines turned into hissing snakes. The soft canopy soil suddenly turned ashen and collapsed under her feet. She sank into something dense and cold that swallowed her like quicksand. She screamed, before being smothered by... the abyss...the infinite... the hole...

She found what she had been searching for.

This section lists entries by The Observer

, that are specifically about Élodie Rakoto.

There is 1 Achievement related to Élodie:

Players can choose from a variety of Cosmetic options to customise Élodie:

Élodie is part of 2 DLCs: